Find could be central to treating channel-related diseases such as cardiac arrhythmias, epilepsy and Parkinson’s
Release Date: October 24, 2014 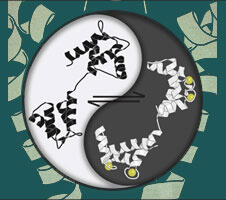 A common protein plays a different role than previously thought in the opening and closing of channels that let ions flow in and out of our cells, researchers at Johns Hopkins report. Those channels are critical to life, as having the right concentrations of sodium and calcium ions in cells enables healthy brain communication, heart contraction and many other processes. The new study reveals that a form of calmodulin long thought to be dormant actually opens these channels wide. The finding is likely to bring new insight into disorders caused by faulty control of these channels, such as cardiac arrhythmias, epilepsy and Parkinson’s disease, the researchers say.

A report on the finding appears in the Oct. 23 issue of the journal Cell.

In the current model, explains David Yue, M.D., Ph.D. , a professor of biomedical engineering and neuroscience at the Johns Hopkins University School of Medicine, calmodulin can do little until it binds to calcium, which changes its shape and snaps it into action. The activated calmodulin can then bind to a specialized control lever inside calcium and sodium channels, which closes the channels.

The new study revises this viewpoint by devising ways to deliver surges of calcium-free calmodulin to channels. In so doing, “it can be seen that calcium-free calmodulin is in no way dormant, but instead markedly boosts the opening of calcium and sodium channels to begin with,” Yue says. When calcium binds to the “resident” calcium-free calmodulin on channels, this initial enhancement dissipates. “The two forms of calmodulin are both powerful, each imposing opposing actions that together maintain exquisite control, akin to the ‘yin-yang’ balance  in Chinese philosophy,” Yue says. “This insight into how the calmodulin-controlled lever works could ultimately help in finding treatments for a plethora of conditions that stem from faulty ion channels.”

Other contributors to the paper were Paul J. Adams, Manu Ben-Johny, Ivy E. Dick and Takanari Inoue, all of The Johns Hopkins University.