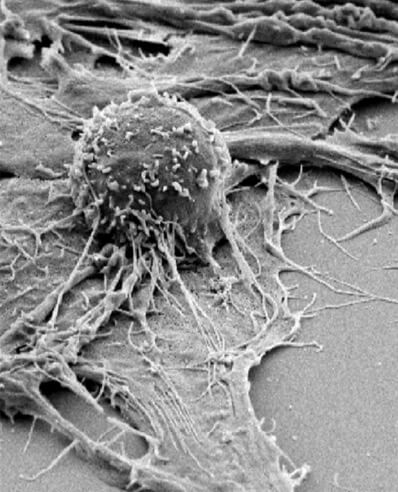 An image of a T-cell
Credit: Photo courtesy of Robbie B. Mailliard, PhD, University of Pittsburgh Graduate School of Public Health

In an expanded, three-year clinical trial of 86 patients with colorectal and 11 other kinds of cancer that have so-called ‘mismatch repair’ genetic defects, scientists at Johns Hopkins Medicine and its Bloomberg~Kimmel Institute for Cancer Immunotherapy have found that half of the patients respond to an immunotherapy drug called pembrolizumab (Keytruda). In a report on the findings, which led the U.S. Food and Drug Administration to approve expanded use of pembrolizumab for patients, the researchers also say they found evidence that the immune responses closely aligned with mutations found in their cancers. The report is published online in the June 8 issue of the journal Science.

“Our study results may lead to a new standard-of-care that includes mismatch repair deficiency testing to help identify a wider group of patients who have failed other therapies but may benefit from immunotherapy drugs.” says Dung Le, M.D., oncologist at the Johns Hopkins Bloomberg~Kimmel Institute, who led the clinical trial.

Mismatch repair (MMR) defects are part of a system that helps cells recognize and correct mistakes during DNA replication. For more than two decades, defective MMR genes have been linked to inherited and non-inherited (or sporadic) forms of colon cancer and used as biomarkers for diagnostic screening and chemotherapy treatment planning.

For the current Johns Hopkins study, designed and led by Le and Luis Diaz, M.D., who recently moved to the Memorial Sloan Kettering Cancer Center from Johns Hopkins, 86 adult men and women with 12 cancer types were recruited to the clinical trial at six U.S. hospitals, including The Johns Hopkins Hospital. All tested positive for mismatch repair defects and had failed to respond to at least one prior therapy. They received pembrolizumab intravenously every two weeks for up to two years. Johns Hopkins biostatistician Hao Wang, Ph.D., used a so-called “basket design” for the clinical trial to enroll MMR-deficient patients with multiple types of cancer into a single trial.

After a median follow-up of 12.5 months, imaging scans showed that tumors shrunk by at least 30 percent in 46 of the 86 patients (53 percent). Tumors completely disappeared in 18 of the 46.

In all, 66 of 86 (77 percent) had at least some degree of disease control, including those who had partial responses, meaning their cancers shrunk by at least 30 percent in diameter, and complete responses, meaning no radiologic evidence of the tumor. This also included those whose tumors did not grow, but remained stable. At one year after the start of therapy, 65 of the 86 patients (76 percent) were alive, and 55 of the 86 (64 percent) were alive at two years.

Five of 20 patients (two with colon cancer, two with pancreatic cancer and one with small bowel cancer), who were listed as having progressive disease, initially responded to pembrolizumab, but their cancers often regrew in areas such as the brain or bone. Three were treated additionally with surgery or radiation and continued treatment with pembrolizumab. All five remained alive at the time of the data cutoff.

Twenty-one of 40 patients with colorectal cancer (52 percent) and 25 of 46 patients with cancers (54 percent) in other organs, such as pancreas, ampullary, cholangiocarcinoma, gastric, endometrial, neuroendocrine, prostate, small intestine and unknown primary responded to the drug.

The most common side effects of the immunotherapy included fatigue, skin inflammation, joint pain and thyroid dysfunction.

At the time of the data cutoff of this report, 18 patients were taken off therapy after two years of treatment. Eleven patients have been off of immunotherapy for a median of 8.3 months, and none have shown evidence of a cancer recurrence. The remaining patients had some residual disease, were taken off therapy at two years (some because of side effects) and after an average of 7.6 months, none of these patients has had evidence of disease progression.

The median point of survival without disease progression and overall survival has not yet been reached. However, the scientists estimate that disease-free survival at one and two years is 64 percent and 53 percent, respectively. Without immunotherapy, patients with advanced, treatment-refractory cancers can expect to live less than six months.

“We still do not understand why only half of the patients in the study responded and half did not,” says Drew Pardoll, M.D., Ph.D., director of the Johns Hopkins Bloomberg~Kimmel Institute and a co-author of the report. “But in testing for MMR deficiency, we essentially married genetic biomarkers with an immunotherapy drug to find patients we thought would be more likely to respond to this increasingly-used drug, and we believe it’s a terrific example of the future of precision immunotherapy.”

He added, “the hope is that other immunotherapy drugs can be aligned with genetic factors to further increase success.”

Pembrolizumab and other immunotherapy drugs can cost $100,000 or more per year, fueling the need to identify patients who are likely to respond to the drug. Tests for defects in mismatch repair range in cost $300 - $600.

The researchers also performed biopsies on residual tumors in 20 patients. In 12, they found no cancer cells, only inflamed cells, fibrotic tissue and mucus. These patients were more likely to survive longer without progression of their cancer (25.9 months) compared with the other eight who had residual cancer cells in their biopsies (2.9 months). However, there was no difference in overall survival between these two groups.

Using gene sequencing and methods to stimulate T-cells, immunologists, led by co-author Kellie Smith, Ph.D., of the Bloomberg~Kimmel Institute, tracked T-cells in the tumor and circulating blood that could recognize the biochemical signatures of mutations in their cancers. In three patients, they found these cells rapidly increased in the circulating blood after immunotherapy was administered, peaking at one to two months later, often prior to detecting tumor regression via CT scans.

These MMR defects were first identified in 1993 by Bert Vogelstein, M.D., and fellow scientists at Johns Hopkins and other institutions. The mutations disable cells’ ability to repair errors in the DNA replication process, which triggers unchecked cellular growth, a hallmark of cancer.

Two decades later, an idea for the current clinical trial took root when Johns Hopkins experts discovered mismatch repair defects in a single patient with colon cancer who responded to immunotherapy while other patients with colon cancer did not.

“This was the eureka moment that led us to develop this clinical trial,” says Vogelstein, who co-directs both the Ludwig Center at the Johns Hopkins Kimmel Cancer Center and the Genetics Program of the Bloomberg~Kimmel Institute.

To estimate how many patients with cancer may be candidates for pembrolizumab based on their mismatch repair defects, the scientists sequenced 592 genes in 12,019 patients with 32 different tumor types. They estimate that mismatch repair defects occur in nearly 5 percent of patients with 11 types of cancer, including the endometrium, stomach, small intestine, colon and rectum, cervix, prostate, bile duct, liver, neuroendocrine system, non-epithelial ovary and uterine sarcomas. This translates to approximately 40,000 (8 percent) stage I-III cancers and 20,000 (4 percent) of all stage IV cancers.