Stop That Scalpel: Many Kids with Open Bone Breaks Can Heal Safely Without Surgery - 12/10/2014

Stop That Scalpel: Many Kids with Open Bone Breaks Can Heal Safely Without Surgery 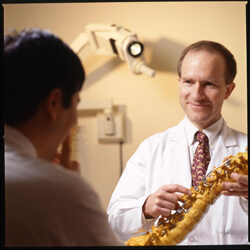 Many children who sustain so-called open bone fractures in the forearm or lower leg can, and do, heal safely without surgery, according to the results of a small study led by investigators at the Johns Hopkins Children’s Center.

Open fractures occur when the broken bone protrudes through the skin, causing a puncture wound.

The study, published ahead of print in the Journal of Children’s Orthopaedics, shows that when the wound is small — less ½-inch in diameter — and the surrounding tissue is free of visible contamination with dirt or debris, children heal well on their own.

The results, based on analysis of outcomes among 40 pediatric patients ages 4 to 16 with such clean open-bone fractures treated nonsurgically at Johns Hopkins between 2000 and 2013, showed normal bone healing and no long-term complications.

The study findings challenge the prevailing clinical dogma that calls for preemptive surgery on every pediatric fracture, the researchers say, and highlight the tendency of clean open bone breaks — known as type one fractures in medical speak — to heal on their own without infection or complications.

“Not all pediatric fractures are created equal and our findings indicate that when it comes to simple, clean open breaks, which are very common in kids, a minimalistic ‘clean, set the bone and watch’ approach could be just as effective as more aggressive surgical treatment,” says study senior investigator Paul Sponseller, M.D., M.B.A., director of pediatric orthopaedics at the Johns Hopkins Children’s Center. “We believe our results set the stage for a larger study to settle the long-standing debate on this issue once and for all.”

The traditional surgical approach requires general anesthesia and the surgical creation of a larger opening around the wound to access the bone. The nonsurgical option requires irrigating and cleaning the flesh wound without cutting any further around the break, setting the bone ends together, and casting the limb, all done with the use of local anesthesia in the emergency room.

Besides avoiding the risks associated with general anesthesia and surgery, the nonsurgical approach leads to less scarring and faster recovery. It also lowers the cost of care as a result of shorter hospital stays, outpatient treatment and a simpler technique.

Sponseller and colleagues, however, caution that not all open fractures are good candidates for nonsurgical repair. Those that include damage to surrounding nerves or blood vessels require a more elaborate surgical treatment, as do wounds that are visibly contaminated and in need of surgical removal of affected tissue, the team notes. Cases in which the realignment of the bone is tricky and cannot be achieved without surgery should also be treated operatively, the researchers say.

“The take-home lesson here is that when it comes to pediatric open fractures, a one-size treatment doesn’t fit all, and each fracture requires careful clinical evaluation,” Sponseller says. “But it is clear to us that surgery is not always the best choice. Nonsurgical approaches should be considered for all kids with simple open bone breaks and no evidence of infection, serious damage or major debris.”

The majority of fractures among children in the study were to the radial or ulnar bones of the forearm and to the tibia, or shin bone, of the lower leg. Most children (36 of 40) received intravenous antibiotics while treated in the emergency room. Additionally, 28 of them were sent home with a prescription for a seven-day course of oral antibiotics as a precaution.

At the end of the study, 35 of the 40 patients returned for follow-up exams. All of them healed fine, the team reports. The parents and/or pediatricians of the remaining five children who did not return for follow-up also reported normal outcomes and lack of complications when reached via phone. There was a single minor complication in a 6-year-old child who retained a tiny piece of debris that became encapsulated and inflamed. The encapsulated area was later removed during follow-up without further complications.

Sponseller and his colleagues stop short of calling for a formal change in the current standard of care, but say that if their results are confirmed in a larger trial, they could eventually redefine the treatment of such simple open fractures in children.

Ahmed A. Bazzi, an orthopaedic surgeon at the Children’s Hospital of Michigan, was the first author on the study.