Johns Hopkins research finds subclinical disease in half of those studied, but specialized imaging needed to detect it
Release Date: May 1, 2014 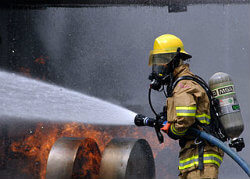 Previous studies have found that cardiovascular disease accounts for 45 percent of deaths of on-duty firefighters nationwide, in contrast to 15 percent of deaths among those with conventional occupations, with heart attack being the number one cause of death. The Johns Hopkins researchers designed their study to identify firefighters at risk long before they show symptoms or have a heart attack. One such method, they report, is cardiovascular imaging.

“If we had just done traditional risk factor assessments, we would have missed each one of those firefighters who we discovered were at risk for a cardiovascular event,” says study leader Elizabeth V. Ratchford, M.D., an assistant professor of medicine at the Johns Hopkins University School of Medicine and director of the Johns Hopkins Center for Vascular Medicine.

“These were young firefighters, with an average age of 46, who were otherwise healthy. By looking beyond the traditional methods of determining risk and using imaging, we were able to find plaque buildup in the coronary and carotid arteries or thickening of the carotid artery in the majority of the firefighters we studied,” she adds.

A report on the research is published in the May 1 issue of the American Journal of Cardiology.

M. Dominique Ashen, Ph.D., C.R.N.P., a nurse practitioner in the Ciccarone Center for the Prevention of Heart Disease at Johns Hopkins and another study leader, says that a traditional risk assessment for cardiovascular disease involves checking blood pressure, cholesterol levels and weight; evaluating for diabetes; taking a family history; calculating the 10-year risk of having a cardiovascular event; and asking about lifestyle factors such as smoking, diet and exercise.

In the new study, 50 firefighters from Baltimore and Howard counties in Maryland were assessed in the traditional ways, but also with a CT scan to search for coronary artery calcium (calcified plaque) and an ultrasound test to search for carotid plaque and measure the thickness of the carotid artery (cIMT).

Although all the firefighters were without cardiovascular symptoms, the researchers found that two-thirds of the participants (33 of 50) had carotid plaque and/or thickening of the carotid artery greater than levels in the 75th percentile of values known to reflect risk. Coronary artery calcium was found in 11 subjects (22 percent) using the CT scan, while carotid artery plaque was found using cIMT in 18 of them (36 percent). There were some firefighters who had both coronary and carotid plaque.

The use of an aspirin and statin were recommended for all firefighters with plaque.

Strikingly, Ratchford says, the researchers also found that 50 percent of the firefighters in the study had prediabetes, and 2 percent had diabetes. Only 14 percent had a normal body mass index, with 38 percent overweight and 48 percent obese.

The researchers say they aren’t sure why firefighters are at increased risk of cardiovascular disease, though the high risk and stress of the job combined with poor lifestyle habits could play a role.

As a second part of the study, the firefighters received lifestyle interventions to prevent or mitigate the cardiovascular problems identified by the Johns Hopkins team. The results have not yet been published.

The researchers argue that cardiovascular disease risk assessment and risk reduction should begin when firefighters first enter the department to identify those at increased risk so that they can be targeted for and maintained on aggressive prevention strategies throughout their careers.

Other Johns Hopkins researchers involved in the study include Kathryn A. Carson, Sc.M., and Steven R. Jones, M.D.

The study was funded by a grant from the National Fallen Firefighters Foundation.