Solving the Mysteries of Short-Legged Neandertals 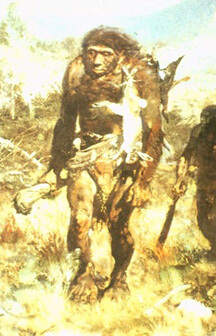 Artist's rendition of a Neandertal.

While most studies have concluded that a cold climate led to the short lower legs typical of Neandertals, researchers at Johns Hopkins have found that lower leg lengths shorter than the typical modern human’s let them move more efficiently over the mountainous terrain where they lived. The findings reveal a broader trend relating shorter lower leg length to mountainous environments that may help explain the limb proportions of many different animals.

Their research was published online in the American Journal of Physical Anthropology and will appear in print in the November issue.

“Studies looking at limb length have always concluded that a shorter limb, including in Neandertals, leads to less efficiency of movement, because they had to take more steps to go a given distance,” says lead author Ryan Higgins, graduate student in the Johns Hopkins Center of Functional Anatomy and Evolution. “But the other studies only looked at flat land. Our study suggests that the Neandertals’ steps were not less efficient than modern humans in the sloped, mountainous environment where they lived.”

Neandertals, who lived from 40,000 to 200,000 years ago in Europe and Western Asia, mostly during very cold periods, had a smaller stature and shorter lower leg lengths than modern humans. Because mammals in cold areas tend to be more compact, with a smaller surface area, scientists have normally concluded that it was the region’s temperature that led to their truncated limbs compared to those of modern humans, who lived in a warmer environment overall.

However, Higgins’ group adds a twist to this story. Using a mathematical model relating leg proportions to angle of ascent on hills, he has calculated that Neandertals on a sloped terrain would have held an advantage while moving compared to their long-legged cousins, the modern humans. Because the area Neandertals inhabited was more mountainous than where modern humans tended to live, the researchers say that this assessment paints a more accurate picture of the Neandertals’ efficiency of movement as compared to humans. “Their short lower leg lengths actually made the Neandertals more adept at walking on hills,” explains Higgins.

But the group didn’t stop there. “In our field, if you want to prove an adaptation to the environment, like mountains leading to shorter leg lengths, you can’t just look at one species; you have to look at many species in the same situation, and see the same pattern happening over and over again,” says Higgins. “We needed to look at other animals with similar leg construction that existed in both flat and mountainous areas, as Neandertals and humans did, to see if animals tended to have shorter lower leg length in the mountains.”

The researchers decided to study different types of bovids--a group of mammals including gazelles, antelopes, goats and sheep--since these animals live in warm and cold environments on both flat and hilly terrain. The group took data from the literature on bovid leg bones and found that they fit the pattern: mountainous bovids, such as sheep and mountain goats, overall had shorter lower leg bones than their relatives on flat land, such as antelopes and gazelles, even when they lived in the same climates.

Investigating closely related bovids brought this trend into even sharper relief. Most gazelles live on flat land, and the one mountainous gazelle species examined had relatively shorter lower legs, despite sharing the same climate. Also, among caprids (goats and sheep), which mostly live on mountains, the one flat land member of the group exhibited relatively longer lower legs than all the others.

“Biologists have Bergman’s and Allen’s Rules, which predict reduced surface area to body size and shorter limbs in colder environments,” says Higgins. “Our evidence suggests that we can also predict certain limb configurations based on topography. We believe adding the topic of terrain to ongoing discussions about limb proportions will allows us to better refine our understanding of how living species adapt to their environments. This improved understanding will help us better interpret the characteristics of many fossil species, not just Neandertals.”

Funding for this research was provided by the Johns Hopkins Center of Functional Anatomy and Evolution.

This study was completed by Ryan Higgins and Christopher B. Ruff, Ph.D., also of the Johns Hopkins Center of Functional Anatomy and Evolution.