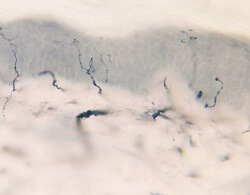 Results of a small study of people with tingling pain in their hands and feet have added to evidence that so-called prediabetes is more damaging to motor nerves than once believed, in a report on the study published online in JAMA Neurology on April 11.

Johns Hopkins neurologists say the study of patients with small fiber neuropathy showed unexpected deterioration over the entire length of sensory nerve fibers, rather than just at the longest ends first, which the investigators say defies the conventional wisdom of how nerves were thought to deteriorate.

Over the three-year course of the study of the 62 participants, 13 of them with prediabetes, the investigators found that generalized damage occurs in those with prediabetes, and that the precursor condition may be less benign than most clinicians appreciate.

“I liken small fiber neuropathy to the canary in the coal mine,” says senior author Michael Polydefkis, M.D., professor of neurology at the Johns Hopkins University School of Medicine and director of the Cutaneous Nerve Lab. “It signals the beginning of nerve deterioration that with time involves other types of nerve fibers and becomes more apparent and dramatically affects people’s quality of life. The results of this new study add urgency to the need for more screening of those with the condition and faster intervention.”

Small diameter nerve fibers reach out to the surface of the skin, and their damage is often marked by development of burning pain in the feet. But routine nerve tests, like nerve conduction, and routine examinations often fail to identify nerve damage because those measurements mostly assess injury to large diameter nerve fibers. The most common cause of small fiber neuropathy is diabetes, Polydefkis notes, but it can also be caused by lupus, HIV, Lyme disease, celiac disease or alcoholism.

In an effort to measure damage more accurately in small nerve fibers in people with small fiber neuropathy symptoms, Polydefkis and his team took small samples of skin — the size of a large freckle — from 52 patients diagnosed with small fiber neuropathy and from 10 healthy controls. Of the 52 patients enrolled in the study with small fiber neuropathy, 13 were considered to have prediabetes, 14 had type 2 diabetes, and 25 had normal blood sugar and an unknown cause of neuropathy. The participants ranged in age from their mid-40s to late 60s, and just less than half were female. Skin samples were taken from the ankle, the lower thigh near the knee and the upper thigh. Three years later, samples from the same area in the same group were taken for comparison.

Microscopic analysis of the skin samples was done to determine the density of small nerve fibers over time. According to the lead author of the study, Mohammad Khoshnoodi, M.D., assistant professor of neurology at Johns Hopkins, a lower density of fibers indicates more nerve damage.

Initially, he says, all patients with small fiber neuropathy had fewer nerve fibers at the test site on the ankle compared to the upper thigh, demonstrating more nerve damage the further down the leg measured. After three years, all three groups of those with small fiber neuropathy lost nerve fibers at the site tested in the ankle. But what surprised the researchers was that nerve fibers were lost at similar rates from the lower and upper thigh sites as well, a phenomenon that would not have been expected if the longest nerve fibers were the most vulnerable.

“We are all taught in medical school that the longest nerves degrade first, and we show that this isn’t always the case,” says Khoshnoodi.

The patients with prediabetes continued to have worsening damage to their small nerve fibers over the course of the study; they lost about 10 percent of their nerve fiber density each year at all sites tested along the leg. Patients with diabetes also lost similar rates of nerve fibers along the three sites of the leg.

“I expected that people with diabetes would do worse, but I didn’t really expect people with prediabetes to experience a similar rate of degradation of their small nerve fibers,” says Polydefkis.

Khoshnoodi cautions that the study was small, and that other factors in addition to high blood sugar, such as smoking, high blood pressure and high cholesterol, may also have contributed to the decline. Future studies that address these risk factors will need to be performed to determine if prediabetes is as debilitating to nerves as full-blown diabetes.

According to the National Institute of Neurological Disorders and Stroke, an estimated 20 million people in the U.S. have some form of peripheral neuropathy. About 50 percent of people with diabetes have neuropathy.

Other authors contributing to the study are Shaun Truelove, Ahmet Hoke and Andrew Mammen of The Johns Hopkins University and Ahmet Burakgazi from Virginia Tech.

The study was funded by a philanthropic gift from Mark Rubenstein.