Shining a Light on Pupil Constriction 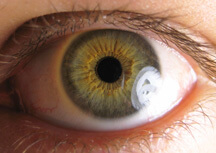 You’ve seen it on television: A doctor shines a bright light into an unconscious patient’s eye to check for brain death. If the pupil constricts, the brain is OK, because in mammals, the brain controls the pupil. Or does it? Now, researchers at Johns Hopkins have discovered that in most mammals, in fact in most vertebrates, the pupil can constrict without any input from the brain. Their work, which also describes for the first time the molecular mechanism underlying this process, appears in the Nov. 3 issue of Nature.

“It was established more than 40 years ago that animals like amphibians and fish have photosensitive irises and don’t necessarily require the brain for the pupillary light reflex, whereas it was thought that mammals generally required brain circuitry,” says King-Wai Yau, Ph.D., professor of neuroscience and ophthalmology at the Johns Hopkins University School of Medicine and member of the Institute for Basic Biomedical Sciences Center for Sensory Biology. “But in neither case did anyone know what the molecular switch was, and now we have found that it’s the pigment melanopsin.”

The research team examined isolated irises from a wide range of mammals by attaching a tiny meter that measures the force of the sphincter muscle that constricts the pupil. They then shined a bright light onto this muscle and measured any contraction. Irises from nocturnal animals including mouse, rat, hamster, dog, cat, rabbit and the Nile grass rat all showed responses to light. Irises from diurnal animals including guinea pig, ground squirrel and pig did not, nor did those from rhesus monkey, marmoset, owl monkey and bush baby, even though the owl monkey and bush baby are nocturnal.

“Most non-primate mammals are considered nocturnal or crepuscular — active at dawn and dusk —  including those, like dogs, that have been domesticated and have picked up human circadian rhythms,” says Yau. “We don’t really know why primates, including us, as well as other daytime functioning animals don’t have this ability.” According to Yau, the eyes of nocturnal animals, because they function in the dark, contain more cells that are sensitive to low light and exposure to bright light could cause eye damage. Perhaps, he suggests, the built-in pupil reflex is a good way to protect the eye.

“So of course we wanted to know what pigment molecules are involved in triggering pupil constriction,” says Yau. Having previously genetically engineered mice to lack melanopsin, the team first tested the pupillary light reflex on irises from these mice. “That was a really exciting result—they didn’t respond to the light,” says Tian Xue, a research associate with Yau. They also tested mice engineered to lack other light-capturing pigments, but all of them responded normally, suggesting that only melanopsin is required for the local pupil reflex. Using mouse genetics, the team then continued to try to identify other proteins that work with melanopsin to cause the pupil to contract in response to light.

Because melanopsin is closely related to the pigment responsible for capturing light in fly eyes, and that molecular pathway has been well studied, Yau’s team hypothesized that the mammalian counterparts to these fly molecules might be what works with melanopsin. So they tested mice engineered to lack some of these molecules. They found that irises from mice lacking the PLC enzyme were unresponsive to light, showing that PLC also is involved in this reflex.

This study was funded by the National Institutes of Health and the Antonio Champalimaud Foundation (Portugal).

Related Stories:
King Wai Yau on why black and white TVs are not that bad

Why Animals Don't Have Infrared Vision