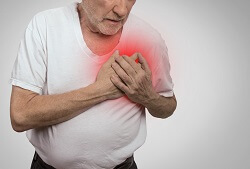 A study by Johns Hopkins researchers of more than 13,000 people has found that even after accounting for such risk factors as high blood pressure, high cholesterol and diabetes, so-called morbid obesity appears to stand alone as a standout risk for heart failure, but not for other major types of heart disease.

In a report on the research, published online on July 28 in the Journal of the American Heart Association, the Johns Hopkins team says morbidly obese individuals were more than two times more likely to have heart failure than comparable people with a healthy body mass index, after accounting for high blood pressure, cholesterol and blood sugar levels. And yet, after accounting for these factors, people with morbid obesity weren’t any more likely to have a stroke or coronary heart disease — basically disease of the heart’s arteries,” due in part to inflammation and an accumulation of plaque in the heart and surrounding blood vessels.

The researchers caution that their study suggests a strong, independent link between severe obesity and heart failure but does not definitively determine cause and effect.

Nevertheless, they say, their findings suggest that while treating hypertension, diabetes and other conditions associated with obesity may be sufficient to prevent coronary heart disease and stroke, this approach may not be enough to prevent an increased risk of heart failure, for which weight loss may be the only foolproof, currently available preventive measure. The federal government estimates that one in three Americans is obese and more than 5 percent are morbidly obese — defined as a body mass index of greater than 35. According to the U.S. Centers for Disease Control and Prevention, almost 6 million people in the United States are living with heart failure, a condition of aging marked by enlarged and/or weakened heart muscle and diminished blood-pumping efficiency, resulting in shortness of breath, fatigue, weakness, trouble breathing when lying down, and swelling in the ankles and feet. Overall, there is a 50 percent mortality rate for people with heart failure five years after diagnosis.

“Obesity in our study has emerged as one of the least explained and likely most challenging risk factors for heart failure because there is no magic pill to treat it, no drugs that can easily address the problem like there are for high cholesterol and high blood pressure,” says Chiadi Ndumele, M.D., M.H.S., assistant professor of medicine and member of the Ciccarone Center for the Prevention of Heart Disease at the Johns Hopkins University School of Medicine. “Even with diet and exercise, people struggle to lose weight and keep it off, and for the morbidly obese, the struggle is often insurmountable.”

Although it isn’t completely clear why obesity alone is linked to heart failure independent of risk factors and not to stroke or coronary heart disease, Ndumele says that there is evidence to suggest that extra body weight exerts a higher metabolic demand on the heart and that fat cells in the abdomen may even release molecules toxic to heart cells.

Obesity has long been known to increase the likelihood of high blood pressure, elevated blood cholesterol and diabetes — all established risk factors for heart and blood vessel diseases. Treating and controlling these conditions have formed the bedrock strategies for reducing the risk of cardiovascular disease, Ndumele says.

To learn if this was truly the case for all types of cardiovascular disease, Ndumele and his colleagues looked at the medical records of 13,730 participants  in the Atherosclerosis Risk in Communities Study who had body mass indexes in healthy ranges or higher at the start of the study and no initial heart disease. The group was composed of 63.8 percent women and 16.9 percent African-Americans. The average age was 54, and body mass index ranged from 18 to 50. All were followed for approximately 23 years to assess links between body mass index and heart failure, coronary heart disease or stroke.

The records also included data for participants’ height, weight, and levels of blood sugar, cholesterol and triglycerides, along with smoking status, alcohol use, professions and exercise levels.

After the final participant follow-up in 2012, there were 2,235 recorded cases of heart failure, 1,653 cases of coronary heart disease and 986 strokes.

In their initial assessment, the Johns Hopkins researchers controlled for differences that might be due to age, sex, race, education level, career, smoking history, exercise and alcohol consumption. Severe obesity was associated with a nearly fourfold higher risk of heart failure and about a twofold higher risk for both coronary heart disease and stroke compared with rates for those with a normal body mass index.

Next, the researchers controlled for other heart disease risk factors, such as diabetes, high blood pressure, or high levels of cholesterol and triglycerides. After this adjustment, Ndumele’s team no longer saw an increase in risk for coronary heart disease or stroke in people with obesity. However, the increased risk for heart failure remained. For every five-unit higher body mass index, there was an almost 30 percent higher risk of developing heart failure across all participants.

“Even if my patients have normal blood sugar, cholesterol and blood pressure levels, I believe I still have to worry that they may develop heart failure if they are severely obese,” says Ndumele. “If our data are confirmed, we need to improve our strategies for heart failure prevention in this population.”