Researchers identify 25 human proteins that may be crucial for HIV-1 infection and survival
Release Date: February 27, 2013 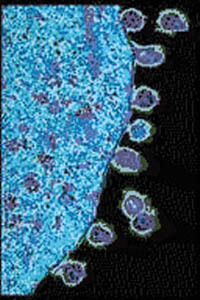 Studying HIV-1, the most common and infectious HIV subtype, Johns Hopkins scientists have identified 25 human proteins “stolen” by the virus that may be critical to its ability to infect new cells. HIV-1 viruses capture many human proteins from the cells they infect but the researchers believe these 25 proteins may be particularly important because they are found in HIV-1 viruses coming from two very different types of infected cells. A report on the discovery, published online in the Journal of Proteome Research on Feb. 22, could help in building diagnostic tools and novel treatment strategies to fight HIV infection.

When a new HIV particle emerges from an infected human cell, it wraps itself in membrane and proteins from the host cell, effectively disguising itself from the immune system’s sentinels. Scientists believe that some of these proteins are specifically “chosen” by the virus in order to enhance its ability to survive, while other proteins may be just randomly caught up in the viral packaging.

“Human proteins incorporated into viruses could potentially be used to find, and selectively kill, cells harboring HIV, but the problem is that HIV can steal hundreds of different proteins unique to each cell type that it infects, leaving too many targets for researchers and drug companies to chase after,” according to David Graham, Ph.D., the senior author of the study report and assistant professor of molecular and comparative pathobiology at the Johns Hopkins University School of Medicine. The new research, he says, narrows the target pool to a small number of proteins that may be most important for HIV infection and survival.

HIV infects several types of cells throughout the body, most notably CD4+ T-cells and macrophages, both major parts of the immune system. Graham and his team suspected that a comparison of human proteins incorporated into HIV particles from different cell types could lead them to the human proteins important to the virus’ disease activity.

After isolating HIV-1 particles from lab-grown human CD4+ T-cells, Graham and his team used powerful protein sequencing and bioinformatics tools to identify all of the associated human proteins. They then used the same bioinformatics tools to re-analyze protein content information from HIV-1 particles isolated from lab-grown human macrophages, data previously published by another group of researchers.

With the help of sophisticated computing, the team identified 279 proteins taken up by HIV-1 particles from one or the other cell type. Of these, only 25 were shared by viruses from both cell types.

One protein the research team identified that could be particularly important to diagnosis and treatment is CD44, because it appears to be the only one of the 25 capable of binding to other cells. It helps the viruses attach themselves to sites of inflammation. Graham suggests that “this makes a lot of sense for a virus that likes to infect T-cells and macrophages because both types of cells migrate to sites of inflammation to help out. Little do they know that HIV viruses are lying in wait.”

Other authors of the report include Michael Linde, David Colquhoun, Ceereena Mohien, Thomas Kole, Veronica Aquino and the late Robert Cotter of the Johns Hopkins University School of Medicine; Nathan Edwards of Georgetown University; and James Hildreth from the University of California, Davis.

This work was supported by grants from the National Heart, Lung, and Blood Institute (contract NHLBI-HV-10-05_(2)), the National Institute of Mental Health (P01 MH070306) and the Johns Hopkins University Dean’s Office.