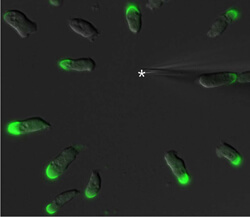 Cells migrate toward a glass needle (*) releasing a chemical attractant. Callipygian (green) is at the back of the cells.
Kristen Swaney, Johns Hopkins Medicine

When Greek mythology and cell biology meet, you get the protein Callipygian, recently discovered and named by researchers at The Johns Hopkins University for its role in determining which area of a cell becomes the back as it begins to move.

The findings, made in the amoeba Dictyostelium discoideum, shed light on how symmetrical, round cells become “polarized,” or asymmetrical and directional. A summary of the findings was published online June 30 in the Proceedings of the National Academy of Sciences.

“Cells have to have a front and a back to migrate,” says Peter Devreotes, Ph.D., professor and director of the Department of Cell Biology at the Johns Hopkins University School of Medicine. “Callipygian shuts off proteins that work at the front edge of cells. By doing so, it helps create the back of a cell, so we named it after the Venus Callipyge.”

During cell migration, the front and back of the cell have to coordinate with each other, almost like dance partners. When a chemical “move-this-way” signal reaches a cell, a single protrusion, or pseudopod, begins to form in that direction due to rodlike actin filaments that grow and push the cell’s membrane out. The back of the cell is then pulled forward, and the process repeats itself. Both extension of the front and retraction of the back require specific sets of proteins that must localize to the correct sites within the cell for proper migration.

To find more proteins involved in cell movement, Kristen Swaney, Ph.D., then a graduate student in Devreotes’ laboratory, decided to mark proteins by genetically attaching a fluorescent tag to them. Based on their sequences, two dozen of these were predicted to interact with the well-known front molecule PIP3, suggesting that they too would move to the front of the cell after a migration signal was received. Most of them did, but Callipygian went to the back, says Swaney. It didn’t bind to PIP3, either.

“We already knew a lot about front proteins and how pseudopods are generated, but the formation of the back of the cell is more of a mystery, so we decided to follow Callipygian’s lead,” says Devreotes.

The researchers are continuing to work on understanding the dynamics of “front-and-back proteins” and how they contribute to cell polarity and migration, hoping to shed light on processes such as wound healing and cancer cell metastasis.

Other authors of the report include Jane Borleis and Pablo Iglesias of The Johns Hopkins University.

This work was supported by grants from the National Institute of General Medical Sciences (GM28007, GM34933) and the American Heart Association (09PRE2300057).