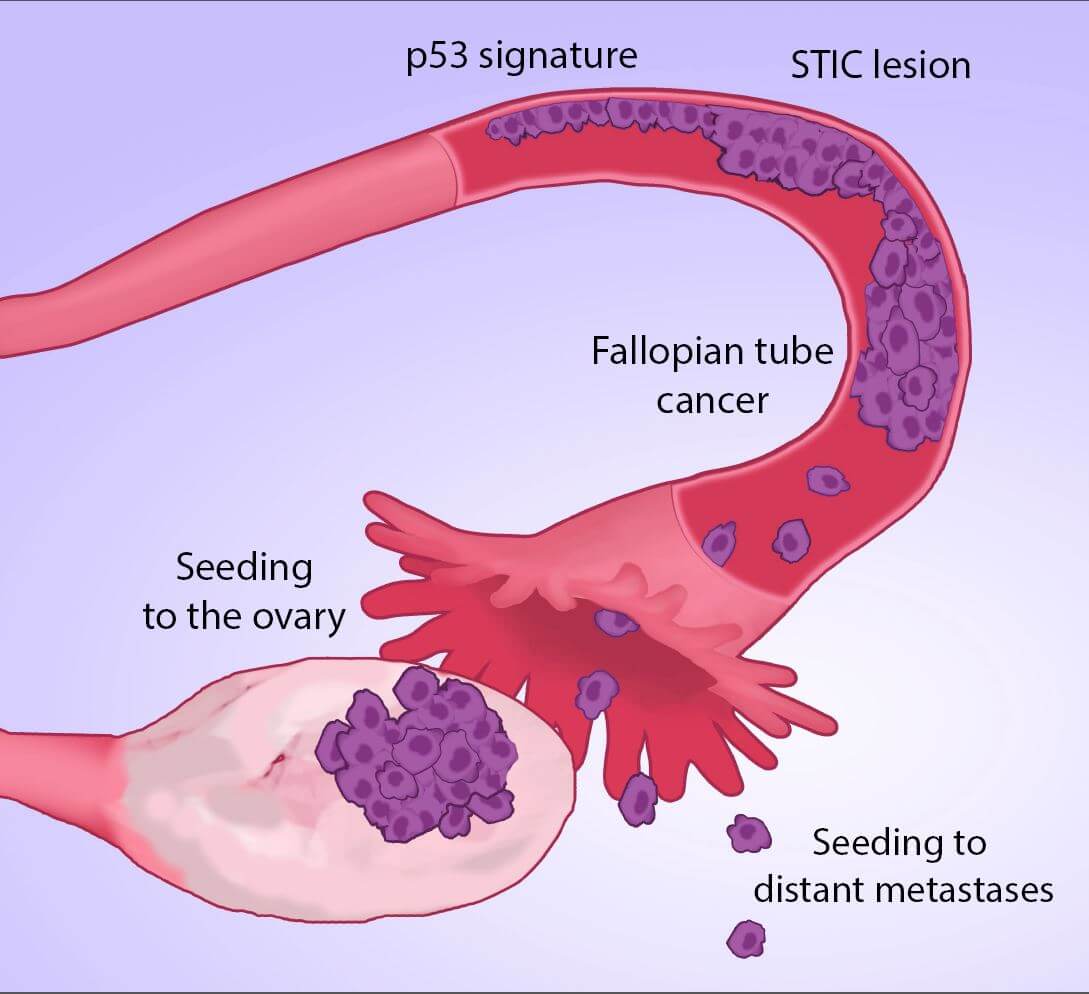 Some scientists have suspected that the most common form of ovarian cancer may originate in the fallopian tubes, the thin fibrous tunnels that connect the ovaries to the uterus. Now, results of a study of nine women suggest that the genomic roots of many ovarian tumors may indeed arise in the fallopian tubes, potentially providing insights into the origin of ovarian cancer and suggesting new ways for prevention and intervention of this disease.

The fifth largest cause of cancer deaths in women, ovarian cancer is generally diagnosed too late in most patients and less than 30 percent of women with the disease survive beyond 10 years.

“Ovarian cancer treatments have not changed much in many decades, and this may be, in part, because we have been studying the wrong tissue of origin for these cancers,” says study co-leader Victor Velculescu, M.D., Ph.D., a professor of oncology at the Johns Hopkins Kimmel Cancer Center. “If studies in larger groups of women confirm our finding that the fallopian tubes are the site of origin of most ovarian cancer, then this could result in a major change in the way we manage this disease for patients at risk.”

For the new study, described in the October 23rd issue of Nature Communications, scientists at the Johns Hopkins Kimmel Cancer Center and Dana Farber Cancer Institute in Boston collected tissue samples containing normal cells, ovarian cancers, metastases that had spread elsewhere, and small cancers found in the fallopian tubes, which included single cell layers of cancer called “p53 signatures” and serous tubal intraepithelial carcinoma, or STIC lesions. All of the samples came from five women who had been diagnosed with high grade serous ovarian tumors, the type of cancer that accounts for three quarters of the estimated 22,000 women diagnosed with ovarian cancers each year in the United States.

The scientists also collected samples from STIC lesions and normal cells from four women who had undergone prophylactic removal of their ovaries and fallopian tubes because of hereditary gene mutations in the ovarian and breast cancer-linked BRCA gene, or — in one case — a pelvic mass.

Because some of the cancers were extremely small — some lesions were only one cell-layer thick — postdoctoral fellows Eniko Papp from Johns Hopkins and S. Intidhar Labidi-Galy from Dana Farber, together with Velculescu and co-leader Ronny Drapkin, M.D., Ph.D., formerly of the Dana Farber Cancer Institute and now at the University of Pennsylvania, developed a way to isolate the relatively few cancer cells from the larger mass of adjacent normal cells.

The researchers stained the small cancers to highlight the cells containing mistakes in the p53 gene, which have long been linked to the onset of many cancer types. Then, the scientists used an infrared laser to peel off the highlighted area of cancer cells. Next, the scientists performed what is known as whole-exome genome sequencing — sequencing all known genes — on all of the samples to create a catalog of the genetic blueprint of the protein coding genes in the cells’ DNA. Without this approach, the results of genomic sequencing would have been swamped with DNA from normal cells, making it difficult to detect cancer-linked DNA errors, Papp says.

The Johns Hopkins and Dana Farber research teams then searched for mistakes in the DNA sequences, including areas where one DNA molecule was switched for another, and spots where large regions of DNA in a particular chromosome were altered.

The results showed that all nine patients lost identical regions of chromosome 17, where the cancer-linked p53 gene is located, in each of the cancer samples, including the early-stage STIC lesions, suggesting that the “misprinted” or flawed p53 gene is an early step in ovarian cancer development.

All nine patients also had lost portions of chromosomes containing one or both BRCA1 and BRCA2 genes, which have long been linked to hereditary as well as sporadic breast and ovarian cancers. Four patients had deletions in chromosome 10 where another cancer-linked gene called PTEN is located.

By using results of their genomic studies, the team estimated the fraction of cancer cells in which a mutation was likely to occur. Reasoning that there would likely be fewer mutations in the original cancer cells than in their successors, the scientists created an evolutionary tree among the ovarian cancers in the five women. They say the results led them to conclude that each of the women’s cancers began with mistakes in STIC or earlier lesions located in the fallopian tubes. Additional DNA mistakes were found in cancer cells lodged in the ovary near the fallopian tube and in metastatic sites. Overall, they say, these analyses suggest that the development of cancer in the ovaries is the result of a seeding event from the initial tumor in the fallopian tubes that already contains the key DNA changes needed for this disease.

To determine the length of time it likely took for the study patients’ cancers to form, the scientists used multiple statistical models that took into account the patient’s age when they were diagnosed and the total number of mutations in each patient’s cancer. Their results indicate that ovarian cancers developed from STIC lesions within an average of 6.5 years among the patients analyzed.

However, when the patients’ cancers reached their ovaries, the progression to metastatic disease was estimated to have occurred rapidly, within two years, on average. “This aligns with what we see in the clinic, that newly-diagnosed ovarian cancer patients most often already have widespread disease,” says Velculescu.

Velculescu cautions that medical practice may not change much until additional studies validate their findings, and there are ongoing clinical trials studying the removal of fallopian tubes instead of ovaries in women with cancer-causing, hereditary BRCA1 and BRCA2 mutations. Velculescu also notes that the fallopian-first theory may not apply to other, less common types of ovarian cancer.

A confirmation of their work, says Velculescu, may help spare some women removal of their ovaries and the loss of hormones that leads to increased risk of heart and other diseases. He adds, “The window of time that exists between the development of a STIC lesion and metastatic disease highlights the importance of new screening approaches such as liquid biopsy methods for early detection of ovarian cancer.”

Velculescu is a founder of Personal Genome Diagnostics and is a member of its Scientific Advisory Board and Board of Directors. Velculescu owns Personal Genome Diagnostics stock, which is subject to certain restrictions under university policy. The terms of this arrangement are managed by The Johns Hopkins University in accordance with its conflict of interest policies.