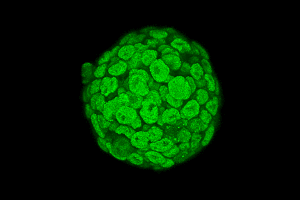 Researchers genetically “knocked out” the protein implicated in ALS in these mouse cells, then replaced it with a custom-designed protein (tagged in green) that did the same job. This rescued the cells from death.
Credit: Jonathan Ling/Johns Hopkins Medicine

Autopsies of nearly every patient with the lethal neurodegenerative disorder amyotrophic lateral sclerosis (ALS), and many with frontotemporal dementia (FTD), show pathologists telltale clumps of a protein called TDP-43. Now, working with mouse and human cells, Johns Hopkins researchers report they have discovered the normal role of TDP-43 in cells and why its abnormal accumulation may cause disease.

In an article published Aug. 7 in Science, the researchers say TDP-43 is normally responsible for keeping unwanted stretches of the genetic material RNA, called cryptic exons, from being used by nerve cells to make proteins. When TDP-43 bunches up inside those cells, it malfunctions, lifting the brakes on cryptic exons and causing a cascade of events that kills brain or spinal cord cells. “TDP-43’s role in both healthy and diseased cells has long been a mystery, and we hope that solving it will open new pathways toward preventing and treating ALS and FTD,” says Philip Wong, Ph.D., a professor of pathology at the Johns Hopkins University School of Medicine and senior author of the study.

Almost a decade ago, Wong says, scientists first described the clumps of TDP-43 that commonly appear in the degenerated brain or nerve cells of those with FTD or ALS. But whether the clumps were a cause or an effect of the diseases, and exactly what they did, was unknown.

“Some people thought that the aggregates themselves were toxic,” says Jonathan Ling, a graduate student in Wong’s lab and first author of the new paper. “Another theory is that the aggregates were just preventing TDP-43 from doing what it should be doing, and that was the problem.”

To figure out which theory might be right, Ling deleted the gene for TDP-43 from both lab-grown mouse and human cells and detected abnormal processing of strands of RNA, genetic material responsible for coding and decoding DNA blueprint instructions for making proteins. Specifically, they found that cryptic exons — segments of RNA usually blocked by cells from becoming part of the final RNA used to make a protein — were in fact working as blueprints. With the cryptic exons included rather than blocked, proteins involved in key processes in the studied cells were abnormal.

When the researchers studied brain autopsies from patients with ALS and FTD, they confirmed that not only were there buildups of TDP-43, but also cryptic exons in the degenerated brain cells.

In the brains of healthy people, however, they saw no cryptic exons. This finding, the investigators say, suggests that when TDP-43 is clumped together, it no longer works, causing cells to function abnormally as though there’s no TDP-43 at all.

TDP-43 only recognizes one particular class of cryptic exon, but other proteins can block many types of exons, so Ling and Wong next tested what would happen when they added one of these blocking proteins to directly target cryptic exons in cells missing TDP-43. Indeed, adding this protein allowed cells to block cryptic exons and remain disease-free.

“What’s thought provoking is that we may soon be able to fix this in patients who have lots of accumulated TDP-43,” says Ling.

Ling cautions that questions remain about the role of TDP-43 in ALS and FTD. “We’ve explained what happens after TDP-43 is lost, but we still don’t know why it aggregates in the first place,” he says. Wong’s group is planning studies that may answer these questions, as well as additional tests on how to treat TDP-43 pathology in humans.

The ALS Association estimates that as many as 30,000 Americans are living with ALS at any given time, and more than 5,000 people are newly diagnosed each year. There is no cure for the disease, and most people live two to five years after diagnosis. Similarly, FTD — thought to affect around 50,000 people in the U.S. — has no treatment and shortens life span.

Other authors on this study are Juan C. Troncoso and Olga Pletnikova from the Johns Hopkins University School of Medicine.