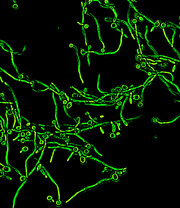 Candida albicans is a double agent: In most of us, it lives peacefully, but for people whose immune systems are compromised by HIV or other severe illnesses, it is frequently deadly. Now a new study from Johns Hopkins and Harvard Medical School shows how targeting a specific fungal component might turn the fungus from a lion back into a kitten. Study results were reported this month in The Journal of Biological Chemistry.

“Treatment options for systemic Candida infections are limited, and a major difficulty in finding new drug targets is that fungi are closely related to us, so we risk hurting the patient as much as the pathogen,” says Rajini Rao, Ph.D., a professor of physiology in the Institute for Basic Biomedical Sciences at the Johns Hopkins University School of Medicine. “What we’ve identified is a function that is critical for virulence. If we could block this through medication, it would leave both the fungus and the host healthy while taking away Candida’s ability to harm.”

Candida lives in the guts of most people as one of many so-called “commensal microbes” — that is, harmlessly. It can sometimes cause local infections of the mouth or genitals, known as thrush, that are treatable with over-the-counter antifungals. But given the opportunity to breach our defenses, Candida can cross into the bloodstream and switch from peaceful coexistence to attack mode, producing long filaments that dig into tissues and destroy them.
Unfortunately, Rao says, “there are only a few antifungal drugs, so it’s particularly dangerous when drug resistance develops in Candida.” For that reason, she says, “we’re always looking for new chinks in its armor.”

In her study, Rao and her collaborators looked for such a new chink in a part of Candida’s cells known as the vacuole. The vacuole’s main function is as a recycling center that chews up cellular waste, so it was a surprise when a previous study from her group found that a well-known antifungal drug prevented the vacuole from becoming acidic. This led them to suspect that acidification of the vacuole was important for virulence. The research team focused on V-ATPase, the enzyme responsible for making many compartments of the cell, including the vacuoles, acidic. Because humans have a very similar enzyme, the scientists weren’t looking to eliminate it altogether — “that would have been like taking a sledgehammer to cells,” Rao explains. Rather, they homed in on just one of the enzyme’s components, known as subunit a. Like many proteins in fungi and higher animals, there is more than one version of subunit a, which come from different genes — a duplication that gives the organism a backup in case a mutation disables one of the genes.

Rao said first they altered Candida cells so that they could only use one or the other version of the subunit a gene. As expected, they found that inactivating either one had no effect because the other compensates in every function — except one. It turned out that acidification of the vacuole exclusively depended on one version of the gene. This allowed them to test the importance of the vacuole’s acidity on virulence, separate from the many other functions of the V-ATPase. Unable to acidify the vacuole, the fungus could no longer form the tentacle-like filaments that characterize its deadly form. When the researchers injected healthy Candida into the bloodstream of mice, nearly all died within a week. In contrast, mice injected with the strain of fungus that was unable to acidify the vacuole remained healthy and survived.

Rao says that this study reveals a vulnerability that could be exploited using drugs known to alter the pH of the vacuole, rendering Candida harmless while potentially posing little risk to infected patients. For example, previous studies from her lab showed that a drug already in use to treat a heart condition known as arrhythmia had the unexpected effect of blocking acidification of the fungal vacuole. The next step, she says, would be to screen drugs already approved by the U. S. Food and Drug Administration to increase the repertoire of antifungal agents to combat deadly fungal infections.

Other authors on the report were Cassandra Patenaude, Yongqiang Zhang and Brendan Cormack of the Johns Hopkins University School of Medicine, and Julia Köhler of Harvard Medical School.