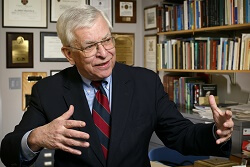 Richard T. Johnson, an internationally renowned Johns Hopkins neurologist who is credited with inventing the field of neurovirology — the study of viruses that infect the nervous system — died at The Johns Hopkins Hospital on November 22 of pneumonia. He was 84 and had been active up until the last weeks of his life, giving lectures at medical centers around the nation and overseas.

A member of the Johns Hopkins University School of Medicine faculty from 1969 to 1997, Johnson served as director of the Department of Neurology from 1988 until 1997 and also had a joint appointment in the Department of Immunology and Infectious Diseases in the Bloomberg School of Public Health. He mentored more than 55 postdoctoral fellows in virology, neurology, immunology and neurovirology, with at least 10 of them going on to become heads of their own departments, and he served on the faculties of medical schools in Australia, Germany, Iran, Peru and Thailand.

“He influenced literally hundreds, if not thousands, of medical students, undergraduates, and postdoctoral fellows through his charismatic and spell-binding lectures, and through direct mentoring,” says Justin McArthur, the current head of Johns Hopkins’ Department of Neurology.

“Many people considered him a ‘mentor’s mentor’ because of his insight, perseverance, and dogged enthusiasm for his trainees,” McArthur says.

Completing his internship in medicine at Stanford University Hospitals in San Francisco, he worked as a clinical pathologist in the Department of Virus Diseases at the Walter Reed Army Institute of Research, where his interest in the origin of viral diseases and infections of the central nervous system began. He then completed a residency and fellowship in neurology and neuropathology at Massachusetts General Hospital.

Additional teaching and research in Great Britain and Australia led to appointment to the department of neurology at Case Western Reserve University School of Medicine in 1964. It was from there that he was recruited to come to Johns Hopkins in 1969 to join Guy McKhann of Stanford to found Johns Hopkins’ Department of Neurology.

McKhann, a Yale medical school graduate and one-time pediatric resident at Hopkins, recalls that the search committee for the first director of Johns Hopkins neurology was headed by Vernon Mountcastle, the legendary founder of neuroscience, and after much deliberation he had “narrowed the field down to Dick Johnson and me.”

“It was Vernon’s idea to get us both, so we both arrived at Johns Hopkins and spent the rest of our careers here. I took over running the department and Dick built up the research side.”

“Dick, known as RTJ, was focused on infections of the nervous system, particularly viral infections. He essentially invented the field of neurovirology,” McKhann says. “He was involved in early studies of AIDS, the agent involved in kuru [a fatal, degenerative brain disease], mad cow disease, and in various forms of encephalitis.”

McKhann says that in addition to his immense skill as a researcher, Johnson was an expert clinician. “Patients came from all over the world with mysterious infections of the nervous system to see him,” he says. Johnson was also the founder of the multiple sclerosis clinic at Hopkins.

Johnson developed a multidisciplinary laboratory group to study viruses linked to a wide variety of chronic neurological diseases. During this period, he also traveled widely overseas, establishing laboratories to study infectious diseases and teach. His extensive travels earned him the affectionate nickname, the “Pan-Am Professor,” for the old international airline, Pan American. He was an exceptionally good storyteller, practicing his repartee upon his fellows, and greatly enjoyed attending scientific meetings, “where he regaled all with tales of his travels, and of the pioneers of neurology and neurosurgery at Mass General or Hopkins,” McArthur recalls.

Johnson succeeded McKhann as director of the Department of Neurology in 1988 and “continued its path to excellence,” McKhann says.

During his directorship of neurology, Johnson expanded the faculty from 40 to more than 100 and established new programs, including neurointensive care and epilepsy monitoring.

He twice won awards for clinical teaching and was an exceptionally prolific researcher, publishing more than 300 peer-reviewed articles in professional journals and book chapters, and editing 10 books. He was the lone author of Viral Infections of the Nervous System, a landmark text first published in 1982.

Johnson received numerous national and international awards, including ones of which he became the first recipient. Among these were the first Association of British Neurologists Multiple Sclerosis Medal in 1986, the first Soriano Award from the World Federation of Neurology in 1993, and the first Pioneer Award from the International Society of Neurovirology in 1999. After his supposed retirement in 1997, he served as director of the National Neuroscience Institute of Singapore and as editor of Annals of Neurology.

Among Johnson’s protégés was Janice Clements, now vice dean for the faculty in the Johns Hopkins School of Medicine as well as a professor of molecular and comparative pathobiology, neurology and pathology. She joined Johnson’s laboratory as a fellow in 1975 and says that the lessons she learned from his Monday morning discussions of all the fellows’ research projects provided her with the framework for her subsequent research career, which has included important discoveries about HIV.

"Richard Johnson’s research has had an enormous impact on how viral infections are studied,” says Clements. “His research was novel and had a major influence on academic medicine and the treatment of virus infections of the brain. One of the first patients with HIV was diagnosed by Dr. Johnson because the disease had caused neurological disease.

“Dr. Johnson mentored many generations of virologists, neurologists, immunologists and neurovirologists who now lead research and patient care in these disciplines into the next millennium.

“Personally, Dick's mentoring provided me with the opportunities and unique expertise in viral infections on the brain that has allowed me to become a professor at the Johns Hopkins School of Medicine.”

Johnson is survived by his wife, Sylvia Eggleston Wehr, and four children: Carlton Johnson of Florida, Erica Meadows of Baltimore and Kosovo, and Matthew Johnson and Nathan Johnson of Los Angeles, along with three step daughters, Elizabeth Drigotas, Anne Broadus and Elaine Doherty. He is also survived by five grandchildren and six step grandchildren. His wife of over 50 years, Frances Wilcox Johnson, died in 2008.

In lieu of flowers, donations may be made to the Richard T. Johnson Fund c/o the Fund for Johns Hopkins Medicine, 750 East Pratt Street, 17th floor, Baltimore MD 21202 or through its secure online tribute form: https://secure.jhu.edu/form/fjhm.

A memorial service will be held on Friday, December 4, at 11 a.m. at the Church of the Redeemer, 5603 North Charles Street in Baltimore.