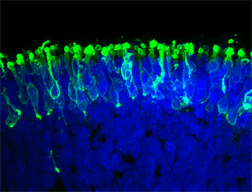 Rod photoreceptors (in green) within a "mini retina" derived from human iPS cells in the lab.
Credit: Johns Hopkins Medicine

Using a type of human stem cell, Johns Hopkins researchers say they have created a three-dimensional complement of human retinal tissue in the laboratory, which notably includes functioning photoreceptor cells capable of responding to light, the first step in the process of converting it into visual images.

“We have basically created a miniature human retina in a dish that not only has the architectural organization of the retina but also has the ability to sense light,” says study leader M. Valeria Canto-Soler, Ph.D., an assistant professor of ophthalmology at the Johns Hopkins University School of Medicine. She says the work, reported online June 10 in the journal Nature Communications, “advances opportunities for vision-saving research and may ultimately lead to technologies that restore vision in people with retinal diseases.”

Like many processes in the body, vision depends on many different types of cells working in concert, in this case to turn light into something that can be recognized by the brain as an image. Canto-Soler cautions that photoreceptors are only part of the story in the complex eye-brain process of vision, and her lab hasn’t yet recreated all of the functions of the human eye and its links to the visual cortex of the brain. “Is our lab retina capable of producing a visual signal that the brain can interpret into an image? Probably not, but this is a good start,” she says.

The achievement emerged from experiments with human induced pluripotent stem cells (iPS) and could, eventually, enable genetically engineered retinal cell transplants that halt or even reverse a patient’s march toward blindness, the researchers say.

The iPS cells are adult cells that have been genetically reprogrammed to their most primitive state. Under the right circumstances, they can develop into most or all of the 200 cell types in the human body. In this case, the Johns Hopkins team turned them into retinal progenitor cells destined to form light-sensitive retinal tissue that lines the back of the eye.

Using a simple, straightforward technique they developed to foster the growth of the retinal progenitors, Canto-Soler and her team saw retinal cells and then tissue grow in their petri dishes, says Xiufeng Zhong, Ph.D., a postdoctoral researcher in Canto-Soler’s lab. The growth, she says, corresponded in timing and duration to retinal development in a human fetus in the womb. Moreover, the photoreceptors were mature enough to develop outer segments, a structure essential for photoreceptors to function.

Retinal tissue is complex, comprising seven major cell types, including six kinds of neurons, which are all organized into specific cell layers that absorb and process light, “see,” and transmit those visual signals to the brain for interpretation. The lab-grown retinas recreate the three-dimensional architecture of the human retina. “We knew that a 3-D cellular structure was necessary if we wanted to reproduce functional characteristics of the retina,” says Canto-Soler, “but when we began this work, we didn’t think stem cells would be able to build up a retina almost on their own. In our system, somehow the cells knew what to do.”

When the retinal tissue was at a stage equivalent to 28 weeks of development in the womb, with fairly mature photoreceptors, the researchers tested these mini-retinas to see if the photoreceptors could in fact sense and transform light into visual signals.

They did so by placing an electrode into a single photoreceptor cell and then giving a pulse of light to the cell, which reacted in a biochemical pattern similar to the behavior of photoreceptors in people exposed to light.

Specifically, she says, the lab-grown photoreceptors responded to light the way retinal rods do. Human retinas contain two major photoreceptor cell types called rods and cones. The vast majority of photoreceptors in humans are rods, which enable vision in low light. The retinas grown by the Johns Hopkins team were also dominated by rods.

Canto-Soler says that the newly developed system gives them the ability to generate hundreds of mini-retinas at a time directly from a person affected by a particular retinal disease such as retinitis pigmentosa. This provides a unique biological system to study the cause of retinal diseases directly in human tissue, instead of relying on animal models.

The system, she says, also opens an array of possibilities for personalized medicine such as testing drugs to treat these diseases in a patient-specific way. In the long term, the potential is also there to replace diseased or dead retinal tissue with lab-grown material to restore vision.

This research was supported by grants from the Maryland Stem Cell Research Fund; the William and Ella Owens Medical Research Foundation; The J. Willard and Alice S. Marriott Foundation; the William and Mary Greve Special Scholar Award from Research to Prevent Blindness, and the National Institutes of Health’s National Eye Institute (R01EY022631, EY1765, R01EY021218 and R01EY06837).