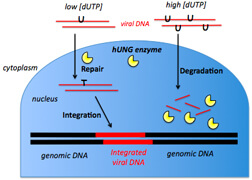 An illustration of what happens when viral DNA enters the nucleus of a cell with low dUTP levels (left) versus high dUTP levels (right).
Amy Weil

A team of researchers based at Johns Hopkins has decoded a system that makes certain types of immune cells impervious to HIV infection.

The system's two vital components are high levels of a molecule that becomes embedded in viral DNA like a code written in invisible ink, and an enzyme that, when it reads the code, switches from repairing the DNA to chopping it up into unusable pieces. The researchers, who report the find in the Jan. 21 early edition of the Proceedings of the National Academy of Sciences, say the discovery points toward a new approach to eradicating HIV from the body.

"For decades, we've seen conflicting reports on whether each of these components helped protect cells from viruses," says James Stivers, Ph.D., a professor of pharmacology and molecular sciences at the Johns Hopkins University School of Medicine's Institute for Basic Biomedical Sciences. "By plotting how much of each are found in different types of cells, as well as the cells' response to HIV, we learned that both are needed to get the protective effect."

Researchers have long known that DNA's code is made up of four building blocks called nucleotides, commonly abbreviated A, T, G, and C. Before a cell divides, DNA-copying enzymes string these nucleotides together based on existing templates, so that each of the new cells gets its own copy of the genome. But because the T nucleotide, dTTP, is very similar to dUTP, a fifth nucleotide that doesn't belong in DNA, the copying enzyme sometimes mistakenly puts in a U where there should be a T.

To prevent this, says Stivers, most human cell types have an enzyme whose job is to break down dUTP, keeping its levels very low. Another quality control measure is the enzyme hUNG2, which snips stray Us out of newly copied DNA strands, leaving the resulting holes to be filled by a different repair enzyme. Certain immune cells called resting cells lack the first quality-control mechanism because, Stivers explains, "They're not replicating their DNA and dividing, so they couldn't care less if they have a lot of dUTP."

This is a critical piece of information, Stivers says, because when a retrovirus like HIV invades a cell, its first order of business is to make a DNA copy of its own genome, then insert that copy into the host cell's genome. If there are many dUTPs floating around in the cell, they will likely make their way into the new viral DNA, and, potentially, later be snipped out by hUNG2. The question, Stivers says, left open by the conflicting results of previous studies, was what effect, if any, this process has on HIV and other viruses.

To address this question, Amy Weil, a graduate student in Stivers'
laboratory, measured dUTP levels and hUNG2 activity in a variety of human cells grown in the laboratory, then exposed them to HIV. Cells with high dUTP but little hUNG2 activity succumbed easily to the virus, which appeared to function just fine with a U-ridden genome.

Similarly, cells with low dUTP levels but high hUNG2 activity were susceptible to HIV. For these cells, it seemed, hUNG2 would snip out the few stray Us, but the resulting holes would be repaired, leaving the viral DNA as good as new.

But in cells with both high dUTP and vigilant hUNG2, the repair process turned into a hack job, Stivers says, leaving the viral DNA so riddled with holes that it was beyond repair. "It's like dropping a nuclear bomb on the viral genome," he says.

By showing how dUTP and hUNG2 work together to protect resting cells from infection, Stivers says, the study identifies a new pathway that could restrict HIV infection in non-dividing cells. Current anti-retroviral drugs effectively suppress the virus, but, Stivers explains, they miss copies of the virus that hide out in non-dividing cells, and "the minute you stop taking anti-retrovirals, it starts replicating again." He suggests that drug strategies could be devised to target this pathway in affected cells, possibly lessening the pool of viruses hiding out in non-dividing cells. The principle could also be applied to other retroviruses, he says, since they, like HIV, all make DNA copies of their genomes as part of the infection process.

Related Stories:
Before turning his attention to enzymes and nucleotides, James Stivers dealt in sharps and flats

Finding That One-in-a-Billion That Could Lead to Disease

The Hop and Slide of DNA Repair