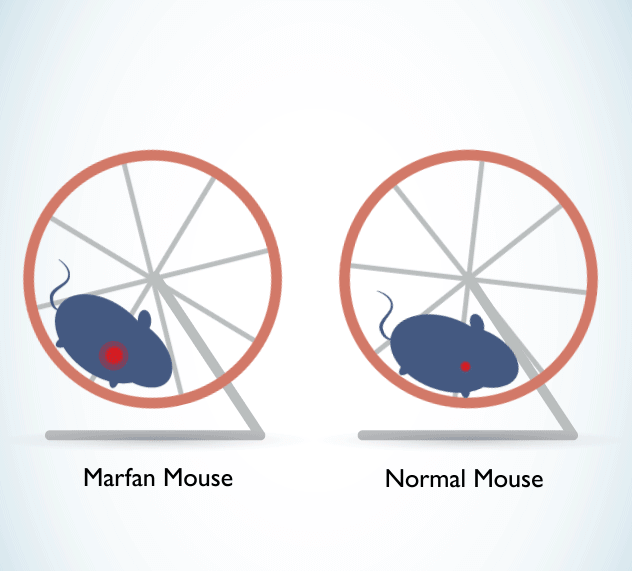 In experiments with mice that have a rodent form of Marfan syndrome, Johns Hopkins researchers report that even modestly increasing stress on the animals’ hearts — at levels well-tolerated in normal mice — can initiate heart failure. The findings, described August 4 in the Journal of Clinical Investigation Insight, revealed a novel cellular pathway in heart tissue that leads to heart failure and may serve as a model for a new standard of treatment for children with this aggressive form of Marfan syndrome.

Marfan syndrome is a genetic disorder that affects connective tissue throughout the body, elongating limbs, fingers and toes, for example. However, its worst effects are in the heart’s blood vessels and valves. Aortic enlargement, heart valve leaks and heart failure — marked by heart enlargement and weakened pumping action — are all potentially life-threatening.

The Hopkins team’s interest in the mouse model grew out of the clinical experience of children with Marfan seen at The Johns Hopkins Hospital over decades.

“There is a small population of children with particularly aggressive and early onset symptoms of Marfan syndrome, who show dramatic signs of heart failure with only a relatively modest amount of valve leakage,” says Hal Dietz, M.D., the Victor A. McKusick Professor of Genetics and Medicine, and professor of pediatrics at the Johns Hopkins University School of Medicine, whose research in Marfan syndrome’s causes and treatment spans decades.

Studying heart failure in humans with Marfan syndrome is complicated in part because it is unclear whether the genetic defect in heart muscle is itself to blame, or whether stresses on the organ normally tolerated by healthy hearts — such as a modest increase in blood pressure — are present to trigger it, according to Rosanne Rouf, M.D., director of the outpatient heart failure program at the Johns Hopkins Bayview Medical Center and assistant professor of medicine at the Johns Hopkins University School of Medicine.

To address some of that complexity, Rouf, Dietz and their colleagues induced stress on the hearts of both wild-type and Marfan mice using a technique called transverse aortic constriction (TAC), which slightly tightens the aorta of experimental mice, mimicking raised blood pressure and inducing a precisely measureable amount of stress to the heart.

Researchers observed the mice’s response to very mild TAC over the course of five weeks. The Marfan mice showed profound heart failure within one week, while the wild-type mice did not fail at all by the end of five weeks.

“The difference between Marfan mice and healthy mice was striking,” says Rouf. “If we expose Marfan hearts to just slight stress, they are in heart failure within one week, whereas normal mice tolerate this level of stress with no problems.”

The researchers then studied what was happening within the heart tissue of TAC Marfan mice to induce heart failure. They found that the muscle cells of the heart were becoming enlarged because they were receiving abnormal growth chemical signals from neighboring support cells called fibroblasts, which make up the structural framework of the heart.

By tracking the signals among cells, the researchers found that one of the affected pathways was a protein called transforming growth factor beta, which is believed to be increased in people with Marfan syndrome and the source of many of the condition’s symptoms, Dietz says.

Using this knowledge, Rouf and the research team repeated their experiments, but this time introduced drug therapies that inhibited the growth factor’s signaling pathway. Specifically, they gave the mice losartan, a drug currently on the market for treating hypertension, and refametinib, an experimental drug in clinical trials for cancer, a disorder marked by abnormal cell growth. The researchers were able to reverse heart failure in all TAC Marfan mice.

Current treatments for heart failure in Marfan patients are limited to complicated surgeries at specialized centers to fix valve leaks, but patients do not always regain heart function as expected.

“This research shows that, rather than taking a one-size-fits-all approach, we need to be much more proactive in figuring out which children may have earlier than usual signs of heart failure and operate before there is any decline in heart function to spare their hearts further stress.”

The new studies also suggest that drugs such as losartan and the experimental anti-cancer medicine may one day be shown to reverse heart failure in children with the most aggressive form of Marfan. But, Dietz emphasized that much more animal and human research would be needed to demonstrate their value.

About 1 in 5,000 people have Marfan syndrome, according to The Marfan Foundation. This includes men and women of all ethnic groups. There is a 50 percent chance that a person with Marfan syndrome will pass along the genetic mutation to their children.

This research was funded by the National Center for Research Resources (S10RR024550), the Office of the Director, Centers for Disease Control and Prevention (S10OD016374), the Sarnoff Cardiovascular Research Foundation, the William S. Smilow Foundation for Marfan Syndrome Research and the Howard Hughes Medical Institute.

Hal Dietz is recognized as the world’s leading authority on Marfan syndrome. He has received more than 50 national and international awards and honors, including the Antoine Marfan Award from the National Marfan Foundation and the Art of Listening Award from the American Heart Association. His research contributions have made diagnosis of the condition patient-specific and accurate. His work has led to the current clinical trial of a surprising potential treatment for Marfan syndrome: a medication used to treat high blood pressure, losartan.

In the late 1980s, Dietz's group linked an error in the gene that encodes fibrillin-1, a connective tissue protein, to Marfan syndrome. To test the hypothesis that fibrilin-1 could dampen the activity of transforming growth factor-beta (TGF?), his group analyzed mice whose fibrillin-1 gene didn’t function. These mice showed all the typical Marfan symptoms, including early death of cells that form lung tissue, overproliferation of cells in the heart's mitral valve and muscle that can't regenerate or enlarge in response to injury or exercise. By injecting the mice with an antibody that blocks TGF?, the researchers prevented those problems. He has since found or helped find the genes underlying four other conditions that cause aortic aneurysms, including Loeys-Dietz syndrome, named after Dietz and another Johns Hopkins scientist, Bart Loeys. In 2005, Dietz and Loeys isolated the two genes that are defective in the disorder, and described characteristic physical features.

Dietz’s progress with Marfan syndrome led him to investigate certain conditions that don’t produce aortic aneurysms. For example, his group determined that losartan normalizes muscle architecture and function in a mouse model of Duchenne muscular dystrophy. They also found that people with some forms of scleroderma have altered TGF? activity. By making mouse models of scleroderma, they want to see if losartan or a similar drug might also treat that condition.

Rosanne Rouf, M.D., is director of the outpatient Heart Failure Program at Johns Hopkins Bayview Medical Center and an assistant professor in the Johns Hopkins University School of Medicine. As a physician-scientist who specializes in treating patients with heart failure, she is committed to identifying molecular mechanisms that treat chronic heart diseases similar to those that impact her patients. Her research focus is in the area of targeting nonmyocyte signaling pathways to develop novel therapeutics addressing a clinical challenge for heart failure in patients who continue to have cardiac dysfunction despite current medical therapy. Clinically, she is an advanced heart failure cardiologist and sees patients at Johns Hopkins Bayview.

The image and b-roll footage/interview that accompanies this news release are available for download.

We are providing them with the understanding that they will be used only to help illustrate the story in the corresponding news release. Please use the credit information provided on this page. If there are anything else you need, please email us at JHMedia@jhmi.edu. Thank you.