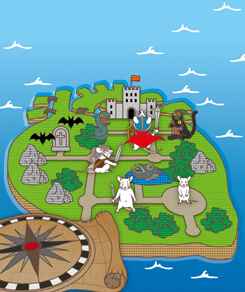 Induced pluripotent stem cells have many hurdles to overcome on the path to becoming mature heart tissue.
Credit: Hiroko Uchida

Johns Hopkins researchers report that a new study of mouse cells has revealed reasons why attempts to grow stem cells to maturity in the laboratory often fail, and provided a possible way to overcome such “developmental arrest.”

Their findings, described in the Nov. 24 issue of the journal Cell Reports, will likely advance the use of stem cells to study and treat adult-onset heart disease, the investigators say.
Nine years ago, Kyoto University’s Shinya Yamanaka unveiled a technique to transform virtually any cell in the body into a stem cell — so-called induced pluripotent stem cells (iPSCs). But some scientists hoping to use the cells for research and therapies have been thwarted by a strange feature of cells grown from iPSCs, the researchers note. “These cells’ maturation is arrested in the embryonic stage, even when they’ve grown in a dish for a year or more,” says Chulan Kwon, Ph.D. , an assistant professor of medicine and member of the Johns Hopkins University School of Medicine’s Institute for Cell Engineering, who led the study.
Building on his team’s interest in using iPSCs from people with heart disease to grow heart tissue, Kwon and his colleagues sought ways to overcome the maturation problem. Doing so, he says, would give them additional information about how heart disease comes about and enable them to more easily screen potential medications. But since heart disease largely affects adults, not embryos, working with immature iPSCs was a nonstarter.
To learn more about the root of arrested development and how it might be overcome, Kwon’s research team and their collaborators analyzed more than 200 heart cell samples from mice embryos and animals of every stage through adulthood, as well as from lab-grown heart tissue made from iPSCs. “We analyzed large-scale datasets to minimize the effect of variation between laboratories,” says lead investigator Hideki Uosaki, M.D., Ph.D., a postdoctoral fellow at the Johns Hopkins University School of Medicine.
Cells develop and reach maturity by precisely choreographing the use of particular genes so that the right proteins are made at the right time. The researchers looked at the expression of more than 17,000 genes in the cells — that is, whether a particular gene was being used, and if so, how much. The team also devised specialized software to make sense of the data.
Their results revealed certain biochemical chain reactions, known as pathways, that normally shut down — or start up — as heart cells reach maturity. These include pathways that allow cells to divide rapidly and form new cells, and to break down fats for energy. In the iPSCs, many of the pathways that were supposed to be off in adult cells were on, and vice versa. Their maturation levels corresponded to that of late-gestation embryos. “That potentially explains why iPSC-derived cells have maturation problems,” Kwon says.
Kwon thinks the explanation for the out-of-whack pathways may be the artificial nature of laboratory cell culture, which is not at all the same as what stem cells would experience inside a living organism.
Now that they know the precise pathways responsible for stalled development, the team says, the plan is to find ways to tune the pathways to induce true, steady maturation and re-create adult heart tissue in the lab. The team also plans to use their method to study tissue maturation of other organs.
Other authors on the paper are Dong I. Lee, Songnan Wang, Matthew Miyamoto, Laviel Fernandez and David A. Kass of the Johns Hopkins University School of Medicine, and Patrick Cahan of Harvard Medical School.
The study was funded by the Magic that Matters Fund; the National Heart, Lung, and Blood Institute (grant numbers R01HL111198, HL119012 and HL107153); a fellowship from the Japan Society for the Promotion of Science; the National Institute of Diabetes and Digestive and Kidney Diseases (grant number K01DK096013); and Fondation Leducq.