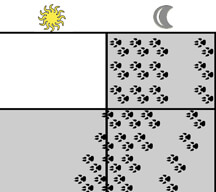 Johns Hopkins researchers report that they have identified a protein essential to the formation of the tiny brain region in mice that coordinates sleep-wake cycles and other so-called circadian rhythms.

By disabling the gene for that key protein in test animals, the scientists were able to home in on the mechanism by which that brain region, known as the suprachiasmatic nucleus or SCN, becomes the body’s master clock while the embryo is developing.

The results of their experiments, reported in the April 24 issue of Cell Reports, are an important step toward understanding how to better manage the disruptive effects experienced by shift workers, as well as treatment of people with sleep disorders, the researchers say.

“Shift workers tend to have higher rates of diabetes, obesity, depression and cancer. Many researchers think that’s somehow connected to their irregular circadian rhythms, and thus to the SCN,” says Seth Blackshaw, Ph.D., an associate professor in the Department of Neuroscience and the Institute for Cell Engineering at the Johns Hopkins University School of Medicine. “Our new research will help us and other researchers isolate the specific impacts of the SCN on mammalian health.”

Blackshaw explains that every cell in the body has its own “clock” that regulates aspects such as its rate of energy use. The SCN is the master clock that synchronizes these individual timekeepers so that, for example, people feel sleepy at night and alert during the day, are hungry at mealtimes, and are prepared for the energy influx that hits fat cells after eating. “A unique property of the SCN is that if its cells are grown in a dish, they quickly synchronize their clocks with each another,” Blackshaw says.

But while evidence like this gave researchers an idea of the SCN’s importance, they hadn’t completely teased its role apart from that of the body’s other clocks, or from other parts of the brain.

The Johns Hopkins team looked for ways to knock down SCN function by targeting and disabling certain genes that disrupt only the formation of the SCN clock. They analyzed which genes were active in different areas of developing mouse brains to identify those that were “turned on” only in the SCN. One of the “hits” was Lhx1, a member of a family of genes whose protein products affect development by controlling the activity of other genes. When the researchers turned off Lhx1 in the SCN of mouse embryos, the grown mice lacked distinctive biochemical signatures seen in the SCN of normal mice.

The genetically modified mice behaved differently, too. Some fell into a pattern of two to three separate cycles of sleep and activity per day, in contrast to the single daily cycle found in normal mice, while others’ rhythms were completely disorganized, Blackshaw says. Though an SCN is present in mutant mice, it communicates poorly with clocks elsewhere in the body.

Blackshaw says he expects that the mutant mice will prove a useful tool in finding whether disrupted signaling from the SCN actually leads to the health problems that shift workers experience, and if so, how this might happen. Although mouse models do not correlate fully to human disease, their biochemical and genetic makeup is closely aligned.

Blackshaw’s team also plans to continue studying the biochemical chain of events surrounding the Lhx1 protein to determine which proteins turn the Lhx1 gene on and which genes it, in turn, directly switches on or off. Those genes could be at the root of inherited sleep disorders, Blackshaw says, and the proteins they make could prove useful as starting points for the development of new drugs to treat insomnia and even jet lag.

This study was supported by the Johns Hopkins Brain Science Institute and the National Institute of Mental Health (grant number 63104).

We are providing this photo/video with the understanding that it will be used only to help illustrate the story in the corresponding news release. Please also find appropriate credit information on each image on the press release page. If there is anything else you need, please email us at JHMedia@jhmi.edu. Thank you.