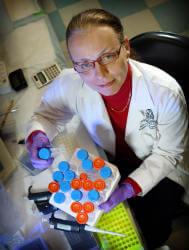 Infectious disease specialists at the Johns Hopkins Children’s Center have identified a protein that regulates the body’s immune response to cytomegalovirus (CMV), a common pathogen that causes lifelong infections and can lead to devastating illness in newborns and those with weakened immune systems.

The protein — a cell receptor called NOD2 found in several types of immune cells — has long been known for its role in fighting off bacterial invaders by sensing their presence and alerting immune cells to release chemicals that weaken or destroy the harmful bacteria. That same protein, the Johns Hopkins team found, also appears to regulate the body’s immune response to CMV by initiating a chemical signaling cascade that curbs viral spread.

The findings, published March 26 in the open-access journal PLOS One, offer what the Johns Hopkins teams says is a first-of-its-kind evidence that a protein that specializes in bacterial detection is also turned on when it sniffs out a virus from the DNA family. DNA viruses are known for their ability to cause chronic infections.

Researchers say NOD2 may provide new opportunities to modify the body’s immune response to CMV and possibly spur the development of a vaccine against this most common congenital infection. CMV affects one in 150 newborns and causes serious neurologic damage in some of them. Although healthy adults who carry the virus rarely exhibit symptoms, CMV can cause serious problems in people with certain immune-deficiency disorders, those with advanced HIV, and in patients receiving immunosuppressive therapy to treat cancer or prevent organ rejection.

“Our results shed a new light on the interaction between CMV and the immune system, which we hope will open up a field of opportunities for treatment and prevention,” says lead investigator Ravit Boger, M.D., an infectious disease specialist and CMV expert at the Johns Hopkins Children’s Center.

Additionally, because the NOD2 protein is regulated by a gene implicated in the inflammatory intestinal condition Crohn’s disease, the findings offer a new explanation for the severe CMV infections that sometimes occur in patients with Crohn’s. The results challenge the prevailing belief that people with Crohn’s are vulnerable to CMV because of the immunosuppressive drugs they receive to control colon inflammation, says Boger.

The new revelations were inspired by observations made in a single Crohn’s patient, whose unusual presentation sparked Boger’s curiosity several years ago. A gut biopsy revealed the presence of CMV in the patient’s intestines. The biopsy result made some sense: Immunosuppressive drugs make patients with Crohn’s vulnerable to serious infections, while most healthy people carry CMV in their bodies without symptoms. That was the general wisdom. Still, Boger recalls, something didn’t quite add up.

“I just kept thinking about this patient and the CMV we found in her colon,” Boger says. “So I started looking into the genetics of Crohn’s disease.”

Then, a telling clue emerged — in her research, Boger noticed that people with Crohn’s often carry a defect in the gene that makes NOD2. What if people with Crohn’s disease were susceptible to CMV not just because of immunosuppressive therapy but because of this defective protein, Boger wondered. What if the malfunctioning NOD2 found in Crohn’s was also responsible for the uncontrolled CMV infections seen in some of these patients?

Cells with intact NOD2s secreted higher levels of interferon, a natural antiviral protein, and were able to curtail viral replication. By contrast, cells with missing or defective NOD2s produced only tiny amounts of interferon and failed to keep the virus in check. In fact, cells with defective NOD2 receptors had up to 70 percent more virus than cells with intact NOD2 receptors. When the scientists restored normal NOD2 function, the previously malfunctioning cells were once again able to block viral replication.

Conducting genetic analysis, the researchers found that a single misplaced amino acid in the NOD2 gene renders the NOD2 receptor incapable of sensing the presence of CMV. That very same mutation, Boger says, is also commonly found in people with Crohn’s disease.

“Taken together, our results suggest that activation of the NOD2 receptor induces the immune system to fight off CMV,” Boger says.
“They also suggest that a defective NOD2 could be the culprit behind severe CMV infections in some patients with Crohn’s.”

Boger and colleagues plan to study the course of CMV in patients with Crohn’s who carry NOD2 mutations to determine whether the presence of defective NOD2 leads to more severe CMV infection. Because CMV is so widely prevalent in humans, Boger says, the findings would have implications well beyond Crohn’s disease. The team is also planning studies to better understand how the virus responds to NOD2 and what strategies it uses to counteract the immune system.

CMV is found in 60 percent of people 6 and older and in more than 90 percent of people older than 80. When infection occurs during pregnancy, the virus can be transmitted to the fetus and lead to a range of complications, the most common of which is hearing loss.
Michael Forman, of Johns Hopkins, was co-investigator on the research.