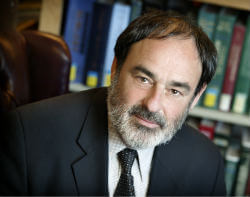 A group of researchers led by Johns Hopkins scientists say they have identified a genetic marker that may be associated with the development of obsessive-compulsive disorder (OCD), whose causes and mechanisms are among the least understood among mental illnesses.

The results of the research are published online May 13 by the journal Molecular Psychiatry.

“If this finding is confirmed, it could be useful,” says study leader Gerald Nestadt, M.D., M.P.H., a professor of psychiatry and behavioral sciences at the Johns Hopkins University School of Medicine and director of Johns Hopkins’ Obsessive-Compulsive Disorder Program. “We might ultimately be able to identify new drugs that could help people with this often disabling disorder, one for which current medications work only 60 to 70 percent of the time.”

Nestadt and his team conducted what is known as a genome-wide association study, scanning the genomes of more than 1,400 people with OCD and more than 1,000 close relatives of people with the mental disorder. A significant association was identified in OCD patients near a gene called protein tyrosine phosphokinase (PTPRD).

OCD is a condition marked by thoughts and images that chronically intrude in the mind and by repetitive behaviors aimed at reducing the associated anxiety. Some of the least disabling forms of the disorder can add an extra hour to the day’s routine, causing distress and interfering with daily life. Some people are so disabled that they can’t leave their homes.

Experts say OCD affects an estimated 1 to 2 percent of the U.S. population, and the World Health Organization has called it one of the more disabling medical conditions worldwide. Antidepressants known as SSRIs work for some people, but not everyone; the same is true of behavioral therapy.

Nestadt says the genome-wide association study findings of a PTRPD-OCD link add to evidence that the genetic region they identified is important. The gene has already been shown in animals to be possibly involved in learning and memory, traits influenced by OCD in humans. Moreover, some cases of attention-deficit hyperactivity disorder (ADHD) have been associated with the gene, and OCD and ADHD have some symptoms in common. He says the gene also works with another gene family, SLITRK, which has also been associated with OCD in animals.

“OCD research has lagged behind other psychiatric disorders in terms of genetics,” Nestadt says. “We hope this interesting finding brings us closer to making better sense of it — and helps us find ways to treat it.”