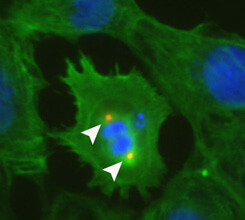 In the heart muscle cell depicted, the arrows show an early sign of replication.

In a study that began in a pair of infant siblings with a rare heart defect, Johns Hopkins researchers say they have identified a key molecular switch that regulates heart cell division and normally turns the process off around the time of birth. Their research, they report, could advance efforts to turn the process back on and regenerate heart tissue damaged by heart attacks or disease.

"This study offers hope that we can someday find a way to restore the ability of heart cells to divide in response to injury and to help patients recover from many kinds of cardiac dysfunction," says cardiologist Daniel P. Judge, M.D., director of the Johns Hopkins Heart and Vascular Institute's Center for Inherited Heart Diseases. "Things usually heal up well in many parts of the body through cell division, except in the heart and the brain. Although other work has generated a lot of excitement about the possibility of treatment with stem cells, our research offers an entirely different direction to pursue in finding ways to repair a damaged heart."

Unlike most other cells in the body that regularly die off and regenerate, heart cells rarely divide after birth. When those cells are damaged by heart attack, infection or other means, the injury is irreparable.

Judge's new findings, reported online March 4 in the journal Nature Communications, emerged from insights into a genetic mutation that appears responsible for allowing cells to continue replicating in the heart in very rare cases.

The discovery, Judge says, began with the tale of two infants, siblings born years apart but each diagnosed in their earliest weeks with heart failure. One underwent a heart transplant at three months of age; the other at five months. When pathologists examined their damaged hearts after they were removed, they were intrigued to find that the babies' heart cells continued to divide - a process that wasn't supposed to happen at their ages.

The researchers then hunted for genetic abnormalities that might account for the phenomenon by scanning the small percent of their entire genome responsible for coding proteins. One stood out: ALMS1, in which each of the affected children had two abnormal copies.

The Johns Hopkins researchers also contacted colleagues at The Hospital for Sick Children in Toronto, Canada, who had found the same heart cell proliferation in five of its infant patients, including two sets of siblings. Genetic analysis showed those children had mutations in the same ALMS1 gene, which appears to cause a deficiency in the Alström protein that impairs the ability of heart cells to stop dividing on schedule. The runaway division may be responsible for the devastating heart damage in all of the infants, Judge says.

These mutations, it turned out, were also linked to a known rare recessive disorder called Alström syndrome, a condition associated with obesity, diabetes, blindness, hearing loss and heart disease.

In further experiments, the Johns Hopkins researchers cultured mouse heart cells, then turned off the ALMS1 gene. Compared to those with normal ALMS1 genes, the number of heart cells in samples without this gene increased by an additional 10 percent. The researchers then contacted colleagues at Jackson Laboratory in Maine who had genetically engineered and bred mice with an ALMS1 mutation. They found that the animals with the mutation had increased proliferation of heart cells after two weeks of age, compared to mice with a normal version of the ALMS1 gene. The cell proliferation did eventually stop in the mice, says Judge, an associate professor at the Johns Hopkins University School of Medicine.

Judge says precise knowledge of the regulatory role played by the ALMS1 mutation should advance the search for ways to help regenerate heart muscle tissue in a controlled fashion. Much work in the field of regeneration has been focused on the use of stem cells, which have the remarkable potential to develop into many different cell types.
Judge cautions that efforts to manipulate ALMS1 to repair damage would be tricky, because uncontrolled proliferation may lead to serious and even lethal complications.

"The children who helped us recognize the importance of this gene were born with a rare condition that leads to heart failure and many other problems, such as diabetes, obesity, blindness and deafness," he says. "Now we hope to apply these discoveries to help millions of others with heart disease."