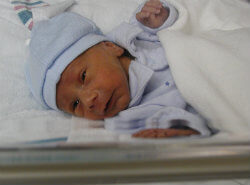 Remote examination of eye scans can be nearly as effective as traditional eye exams in detecting premature newborns with a potentially blinding eye disorder, according to findings from a new federally funded study conducted by investigators at the Johns Hopkins Children’s Center and 12 other institutions.

The condition, known as retinopathy of prematurity, affects about 15,000 U.S. babies a year and is marked by abnormal growth of blood vessels in the light-collecting portion of the eye, or the retina. This leads to retinal scarring, detachment and eventually loss of eyesight. Many infants outgrow the disorder within a few weeks of birth, but 10 percent have a form severe enough to require prompt treatment to stave off permanent damage and vision loss.

The results of the new study, published online June 26 in JAMA Ophthalmology, provide evidence that the remote evaluation approach, known as telemedicine, can correctly identify those in need of surgery — a finding that can help speed up diagnosis and treatment among premature babies born in underserved areas of the country and around the world without pediatric eye experts.

The study, which involved more than 1,250 premature infants born in 13 neonatal intensive care units, compared how accurately either method could identify babies with forms of the disease severe enough to require further exams and, eventually, surgery. All babies were evaluated by both a pediatric ophthalmologist and by two non-physician image readers located off site who analyzed photographs of the babies’ eyes obtained via retinal scans. Infants whose initial on-site exam showed retinopathy of prematurity had follow-up exams at approximately 10-day intervals to monitor disease progression. Babies who showed unremitting eye damage underwent corrective surgery.

“Our findings provide solid evidence that remote evaluation of newborns with eye disease is an effective and safe alternative to frequent physician eye exams in areas that lack access to such specialized services,” says Michael X. Repka, M.D., a pediatric ophthalmologist at the Wilmer Eye Institute at Johns Hopkins and director of ophthalmology at the Johns Hopkins Children’s Center.

The investigators, however, caution that despite its high accuracy, the remote screening approach is not perfect and that a small number of babies requiring treatment could be missed by remote evaluation.

“One missed case is one case too many,” Repka says. “This approach was highly accurate in detecting severe retinopathy of prematurity but no screening system or exam for this condition is yet fool-proof so we need to design and implement safeguards that would render remote screening 100 percent accurate 100 percent of the time. This is our next step.”