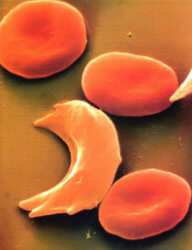 Monthly blood transfusions can substantially reduce the risk of recurrent strokes in children with sickle cell disease (SCD) who have already suffered a silent stroke, according to the results of an international study by investigators at the Johns Hopkins Children's Center, Vanderbilt University and 27 other medical institutions.

Results of the federally funded research described in the Aug. 21 issue of The New England Journal of Medicine, show that children with preexisting silent strokes who receive monthly transfusions have 58 percent lower risk of suffering repeat silent, as well as overt strokes.

There is currently no established treatment for silent strokes, so called because they cause no immediate or easily detectable symptoms. Silent strokes are the most common neurologic complication of SCD, affecting nearly one-third of children with the inherited - and often painful - blood condition. Silent strokes cause brain damage and put children at risk for repeat silent strokes and for the far more dangerous overt strokes, which present with often-dramatic symptoms, such as intense headache, paralysis on one side of the face or body and loss of vision or speech.

Because silent strokes cause subclinical brain injury that diminishes a child's cognitive abilities and academic performance, the research team recommends that all children with SCD have at least one MRI brain scan by the time they enter elementary school. MRI testing is the only way to diagnose silent strokes. Children with evidence of past silent strokes are candidates for monthly blood transfusions, a treatment decision that a hematologist should make in tandem with the family and the child's pediatrician, the investigators say.

"The results of our study show that blood transfusions can play a critical role in preventing this insidious and potentially devastating condition. They also highlight the importance of intervening early to preclude ongoing or further brain injury among these youngsters," says James F. Casella, M.D., vice chair for the clinical trial and the director and Rainey Professor of Pediatric Hematology at the Johns Hopkins Children's Center.

"Most importantly, our findings suggest a much-needed treatment option for clinicians and families of children with sickle cell disease who have had silent strokes," Casella adds.

The three-year study followed 196 children with SCD, ages 5 through 15, who had previously suffered silent strokes. Children who underwent regular transfusions were 58 percent less likely overall to suffer another silent stroke or an overt stroke, while those who had no transfusions were more than twice as likely to have repeat strokes. Put another way, six of the 99 children (6 percent) who received regular blood transfusions suffered another stroke, compared to 14 of the 97 (14 percent) who did not get the treatment. Additionally, children who had monthly transfusions were less likely to suffer a range of other SCD-related problems, such as episodes of extreme pain - a hallmark of the condition - and respiratory complications, the researchers found. For example, there were a total of 295 pain episodes among children who didn't receive transfusions, compared with 126 among those receiving treatment. These pain episodes are often so severe that they require treatment with potent opioids and hospitalization.

"The study indicates that screening for silent strokes in children starting school can lead to early detection and prevention of recurrences, as well as reduction in other complications of sickle cell anemia such as acute painful episodes and acute chest syndrome," says Deborah Hirtz, M.D., program director at the National Institute of Neurological Disorders and Stroke (NINDS), part of the National Institutes of Health

"The results of this trial will make a difference to children with sickle cell anemia and their families."

Because blood transfusions carry some risk of adverse immune reactions or excess buildup of iron in a child's blood, the researchers say the benefits and risks of the treatment should be carefully discussed with each child's family. The decision to transfuse should be made by factoring in each child's overall health, medical history and the ability to take time from school for monthly procedures.

Sickle cell disease, a genetic disorder that affects predominantly people of African, Middle Eastern, Mediterranean and Hispanic descents, is marked by abnormally C-shaped or "sickled" red blood cells - the cells that store and distribute oxygen throughout the body. Because of their abnormal shape, the cells periodically clump inside blood vessels, blocking circulation, which can lead to severe anemia, drive up susceptibility to infection and stroke, and cause severe pain crises. There are more than 100,000 people in the United States with SCD. The condition occurs in 1 out of 400 African-American newborns.

Michael DeBaun, M.D., of Vanderbilt University, was the principal investigator of the study and lead author of The New England Journal of Medicine report.

The research was funded by the National Institutes of Health's National Institute of Neurological Disorders and Stroke under grant numbers: 5U01NS042804, 3U01NS042804, UL1TR000448, UL1TR000003. Additional support came from the National Health Service in the United Kingdom.  This work was also made possible in part by the Johns Hopkins Institute for Clinical and Translational Research (ICTR), funded in part by Grant Number UL1 TR 001079 from the National Center for Advancing Translational Sciences (NCATS), part of the NIH, and by the NIH Roadmap for Medical Research.