Discovery could advance treatments for obesity and other disorders
Release Date: February 10, 2014 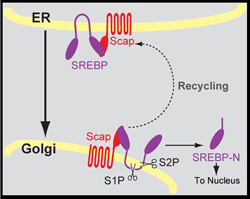 Studying a cycle of protein interactions needed to make fat, Johns Hopkins researchers say they have discovered a biological switch that regulates a protein that causes fatty liver disease in mice. Their findings, they report, may help develop drugs to decrease excessive fat production and its associated conditions in people, including fatty liver disease and diabetes.

A summary of the research appeared online on Jan. 29 in the Journal of Biological Chemistry.

"We've learned how the body finely tunes levels of a protein called SCAP that is required to turn on fat production in cells," says Peter Espenshade, Ph.D., professor of cell biology at the Johns Hopkins University School of Medicine. "We hope this new information will eventually lead to interventions that could help people suffering from obesity-induced fatty liver disease and diabetes."

Espenshade explains that fats, which include cholesterol, are essential to the life of organisms, but too much can sabotage systems that rid the body of toxins and regulate hormones, among other functions. Crucial to the right balance of fats is a family of proteins called sterol regulatory element-binding proteins (SREBPs), which turn on fat-making genes when fat levels in cells are low.

SREBPs are made and embedded in the membrane of the cellular compartment called the endoplasmic reticulum, or ER. To get to the cell's nucleus to turn on genes, the business end of SREBPs has to be clipped away from the membrane. Two different proteins, S1P and S2P, make those clips in sequence. But S1P and S2P live in a different cellular compartment, known as the Golgi.

To safely make the trip to the Golgi, says Espenshade, cells give each SREBP a chauffeur - the protein SCAP - which binds to SREBP before they both make their way to the Golgi. Once there, S1P and S2P free SREBP from the membrane so that it can move to the nucleus.

"We knew lots about this first part of the cycle, but we didn't know what happened to SCAP after it 'dropped off' the SREBP," says Espenshade.

While testing a chemical inhibitor of S1P activity, Espenshade says, he and his team added the chemical to hamster cells and were surprised to find that SCAP disappeared from the cells. That meant that it was either no longer being made or was being broken down somehow, he says.

When they added both the S1P inhibitor and a chemical that prevents SCAP from leaving the ER, SCAP reappeared. This suggested that SCAP was still being made but that the S1P inhibitor was somehow encouraging the destruction of SCAP once SCAP left the safety of home base. Further testing revealed that SCAP was indeed being broken down - in another part of the cell called the lysosome.

Tweaking the components of the cycle again, they engineered cells to keep SREBP in the ER while allowing SCAP to move to the Golgi on its own. This time, even though S1P was blocked, SCAP was no longer broken down by the lysosome, suggesting that what determines the fate of SCAP is the clipping of SREBP by S1P. SCAP can only cycle back to the ER for more rounds of SREBP transport if S1P is able to do its job.

"We don't know what is responsible for freeing SCAP from SREBP, but we now understand that SCAP keeps the cycle going," says Espenshade. "Since SCAP is so central to fat production and all of its consequences, we hope this improved understanding of its activity will help others develop drugs to better regulate the process."

The other author of the report is Wei Shao, Ph.D., of the Johns Hopkins University School of Medicine.

This work was supported by grants from the Pancreatic Cancer Action Network (12-60-25-ESPE) and the National Heart, Lung and Blood Institute (HL077588).

On the Web:
Journal of Biological Chemistry article

Related Stories:
Peter Espenshade on how the body senses cholesterol, research surprises, and the future of medical research