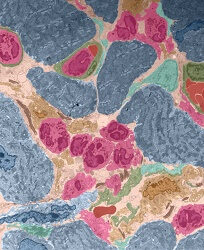 A modified electron microscopy image of eosinophils infiltrating a heart. Eosinophils (pink) can be seen between heart muscle cells (blue) and fibroblasts (turquoise). Eosinophils and other immune cells (orange) exit the blood vessels (green) and infiltrate the heart during myocarditis. This image was taken from a hypereosinophilic mouse with experimental autoimmune myocarditis.
Credit: Daniela Cihakova and Nicola Diny

A new study in mice reveals that eosinophils, a type of disease-fighting white blood cell, appear to be at least partly responsible for the progression of heart muscle inflammation to heart failure in mice.

In a report on the findings, published in The Journal of Experimental Medicine on March 16, researchers found that while eosinophils are not required for heart inflammation to occur, they are needed for it to progress to a condition known as inflammatory dilated cardiomyopathy (DCMi) in mice. The discovery, they say, advances information about the impact of eosinophils on heart function.

“Other studies have shown that people with high levels of eosinophils develop a number of heart diseases. This new work has provided more details about how these immune system cells may lead to deterioration of heart muscle function in mice in a way that lets us draw some parallels to human disease processes,” says Daniela Cihakova, M.D., Ph.D., associate professor of pathology at the Johns Hopkins University School of Medicine and the paper’s senior author.

Heart inflammation, or myocarditis, is rarely diagnosed because it doesn’t always cause severe symptoms and it requires a biopsy to be taken from the patient’s heart. This makes it difficult to study the outcomes of the disease. “We don’t understand why the hearts of some people will heal while those of others develop chronic disease,” says Cihakova.

Different types of myocarditis are distinguished based on the type of immune cell that predominates the inflammation of the heart. For example, in eosinophilic myocarditis, numerous eosinophils infiltrate the heart. It is not known if some types of myocarditis are more likely to progress to DCMi than others. “Our studies show that the presence of eosinophils in the heart makes mice more likely to get DCMi following myocarditis. And if there are a lot of eosinophils, the mice develop even more severe heart failure,” says Nicola Diny, a Ph.D. student in the Bloomberg School of Public Health and the study’s first author. “It will be important to test if the same is true in patients. That way, we may be able to intervene early and prevent DCMi.”

This study, says Cihakova, is the first to examine the role eosinophils play in the development and severity of heart inflammation, and the subsequent progression of inflammation to DCMi. The study addresses a National Institutes of Health-identified need for preclinical models and a clearer understanding of how eosinophils drive heart damage.

For the study, Cihakova and her team first induced myocarditis in two groups of mice: normal mice and a group of mice genetically modified to be eosinophil-deficient. Myocarditis was induced through a process called experimental autoimmune myocarditis, in which mice are immunized with a peptide from heart muscle cells to initiate an immune response against the heart. After 21 days, the researchers found similar levels of acute inflammation in the hearts of both groups by studying the hearts’ tissue. But when the team checked the mice’s hearts later on for evidence of heart failure, the differences between the eosinophil-deficient and the normal mice were striking. The normal mice developed heart failure, while the eosinophil-deficient mice showed no signs of reduced heart function.

“These surprising results told us that it is not the overall severity of inflammation but rather the types of immune cells in the heart that decide whether myocarditis develops into heart failure,” says Diny.

The researchers also examined the hearts for fibrosis, or scar tissue, which develops when mammalian (including human) heart muscles die. This type of scar tissue is also found in DCMi. Although both groups of mice had similar degrees of scar tissue, the eosinophil-deficient mice’s heart functions weren’t negatively affected, while the normal mice developed DCMi.

“This told us that in the absence of eosinophils, heart function can be preserved despite scar tissue formation,” Cihakova says. “It’s also important to note that although eosinophils accounted for just 1 to 3 percent of all heart-infiltrating cells in normal mice, this small percentage can still drive heart failure.”

In another set of experiments, the research team used genetically modified mice, called IL5Tg mice, which have an excess of the protein IL5 that causes the body to make eosinophils. The IL5Tg mice had more inflammation in the atria, or upper chambers of the heart, compared to normal mice in the acute stage and more atrial scar tissue in the chronic stage. IL5Tg mice also had more heart-infiltrating cells in general. Eosinophils accounted for more than 60 percent of heart-infiltrating cells in the IL5Tg mice’s hearts, compared to only 3 percent in normal mice. When the team examined the heart function some 45 days after the start of the experiment, the IL5Tg mice had developed severe DCMi.

Finally, to confirm the differences between the effects of IL5 and eosinophils, the team bred the eosinophil-deficient mice to have excess IL5. Compared to normal mice, these mice showed no decrease in heart function and appeared completely protected from DCMi, which confirms that it is the eosinophils themselves, not high levels of IL5, that are responsible for DCMi development, the investigators say.

To learn more about how eosinophils might drive DCMi progression, the investigators built on the knowledge that eosinophils harbor granules, some of which can kill cells, while others change the function of cells.

“We didn’t see any differences in cell death between the normal mice and those with or without too many eosinophils, so we became interested in the molecules that can change the function of other cells,” says Diny.

In particular, one protein, called IL4, caught the researchers’ attention. Other studies had shown that IL4 made by eosinophils has diverse functions in liver repair and fat tissue. “We wondered if this protein from eosinophils may also be important in the heart,” Cihakova says.

First, the research team used a mouse in which cells that make IL4 turned fluorescent green, thereby allowing researchers to tell where IL4 is made. The team found that eosinophils accounted for the majority of IL4-producing cells. When they used mice that lacked IL4 in all cells, these mice were completely protected from DCMi, just like the eosinophil-deficient mice.

“The take-home message is that inflammation severity doesn’t necessarily determine long-term disease progression, but specific infiltrating cell types — eosinophils, in this case — do,” says Cihakova. Because eosinophil-driven inflammation is so clinically rare, the percentage of people who develop DCMi is unknown, she notes.

While no drugs are currently available to stop or delay the development of DCMi, the researchers hope their findings will help establish a novel target for IL4-blocking medicines that might be used to treat people with myocarditis, possibly preventing disease progression and the need for heart transplantation.