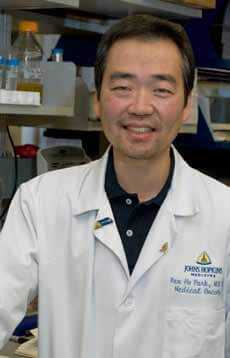 Results of a new laboratory study by Johns Hopkins Kimmel Cancer Center researchers suggests that some rare “missense” mutations in the HER2 gene are apparently not — on their own — capable of causing breast cancer growth or spread. In a related finding, the research team said such mutations, which are found in about 5 percent of breast cancers, may, thus, also fail to predict response to anti-cancer drugs that target the HER2 gene, unlike the more common alterations of the gene that amplify or overexpress it.
Cancer experts estimate that one in five breast cancers contain amplification of — or increased copies of — the HER2 gene. This amplification abnormally carbon copies and overproduces the whole gene many times in the genome, resulting in too much HER2 protein in cancer cells. These so-called HER2 positive tumors can be detected in breast cancer tissue samples and anti-cancer drugs have been designed to seek them out.
“Missense” mutations, on the other hand, swap a single DNA nucleotide for another. Because these rare mutations cause no overproduction of proteins, laboratory models that scan for signs of excess protein production often overlook them. According to Kimmel Cancer Center scientist Ben Ho Park, M.D., Ph.D., about 5 percent of breast cancers contain HER2 missense mutations.
After other scientific reports identified these missense mutations, Park and his colleagues were drawn to study “whether cancers that carry the missense mutations were susceptible to the same drugs as HER2 positive breast cancers,” says Park, a professor of oncology at the Johns Hopkins University School of Medicine.
For the study, the research team individually placed seven missense mutations found in human breast cancers into normal and cancerous human breast cells that don’t produce excessive amounts of HER2 protein or have any baseline HER2 mutations. They identified one HER2 missense mutation that increased HER2 activity, but only in cases where the mutation was partnered with a mutation in another cancer-related gene.
None of the missense mutations increased the formation or spread of tumors in mice, Park and his colleagues report Oct. 27 in the Proceedings of the National Academy of Sciences.
Park says, although missense mutations are rare, further study of them is important given that 210,000 new cases of breast cancer are diagnosed each year in the United States alone, which means more than 10,000 cases annually that may have a HER2 missense mutation.
HER2-positive patients are often treated with HER2-targeted drugs, such as Herceptin (trastuzumab), Perjeta (pertuzumab), Kadcyla (TDM1) or Tykerb (lapatinib). But since the HER2 missense mutations are usually found in HER2-negative breast cancer patients, Park says it is unclear how HER2-targeted drugs might work in patients with the rare mutations.
“Knowledge of HER2 missense mutations, as opposed to HER2 amplification or overexpression, is relatively new,” Park notes. “Studies are ongoing to see if therapies like Herceptin work for breast cancers that have these mutations, but this is not the standard of care.”
Earlier studies, Park says, have shown that one of the HER2 missense mutations, dubbed L755S, could cause resistance to the HER2-positive-targeted lapatinib treatments when the mutated gene was overexpressed. But Park and colleagues found no signs of lapatinib resistance in their experimental cell lines when that mutated gene was active at normal levels.
These results are clinically important, the researchers note, because it could mean that breast cancer patients who carry this mutation at normally expressed levels could still be sensitive to lapatinib treatment.
Clinical trials to test HER2-targeted drugs on cancers with HER2 missense mutations are ongoing, Park says. Looking at the genetics of tumors that respond and don’t respond to these therapies, Park suggests, “would aid our thinking about how to best target those mutations.”
Currently FDA-approved, HER2-targeted therapies cost up to $10,000 per month, which gives urgency to determining whether the drugs may work in breast cancer patients with missense mutations, providing some a new treatment option and sparing others the cost and futility of a drug destined to fail, notes Park.
Other authors on the paper include Daniel Zabransky, Christopher Yankaskas, Rory Cochran, Hong Yuen Wong, Sarah Croessmann, David Chu, D. Marc Rosen, W. Brian Dalton, Ashley Cimino-Mathews, Karen Cravero, Berry Button, Kelly Kyker-Snowman, Justin Cidado, Bracha Erlanger, Heather Parsons, Kristen Manto, Josh Lauring and Konstantinos Konstantopoulos of Johns Hopkins; Shyam Kavuri and Ron Bose of Washington University School of Medicine; and Monica Red Brewer and Carlos Arteaga of Vanderbilt University.
This work was supported in part by The Avon Foundation, the National Institutes of Health’s National Cancer Institute (CA009071, GM007309, CA168180, CA167939, CA183804, R01 CA080195), Conquer Cancer Foundation Young Investigator Award, Breast Cancer Specialized Program of Research Excellence (SPORE) and Vanderbilt-Ingram Cancer Center Support Grant.
Park is a paid consultant for Novartis and a member of the scientific advisory boards of Horizon Discovery, Ltd. and Loxo Oncology, and has research contracts with Genomic Health Inc. and Foundation Medicine. Under separate licensing agreements between Horizon Discovery Ltd. and the Johns Hopkins University, Park is entitled to a share of royalties received by the university on sales of products. The terms of this arrangement are being managed by Johns Hopkins in accordance with its conflict of interest policies.
DOI: 10.1073/pnas.1516853112
Return to Top