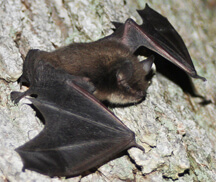 Much of the DNA that makes up our genomes can be traced back to strange rogue sequences known as transposable elements, or jumping genes, which are largely idle in mammals. But Johns Hopkins researchers report they have identified a new DNA sequence moving around in bats — the first member of its class found to be active in mammals. The discovery, described in a report published in December on the website of the Proceedings of the National Academy of Sciences, offers a new means of studying evolution, and may help in developing tools for gene therapy, the research team says.

“Transposable elements are virtually everywhere in nature, from bacteria to humans,” says Nancy Craig, Ph.D., a Howard Hughes investigator and professor in the Johns Hopkins University School of Medicine’s Department of Molecular Biology and Genetics. “They’re often seen as parasites, replicating themselves and passing from generation to generation without doing anything for their hosts. But in fact they play an important role in fueling adaptation and evolution by adding variability to the genome.”

As their name suggests, jumping genes can move from place to place in the genome, sometimes even inserting themselves into the middle of another gene. Some work by replicating themselves and inserting the copies into new places in the genome — retroviruses such as HIV are comprised of this type of jumping gene, which enables the host cell to be hijacked to make more virus particles. Another class of jumping genes, known as “DNA cut-and-paste,” doesn’t make copies, but instead cuts itself out of one site in the genome before hopping into another. Craig explains that in mammal genomes, most jumping genes are of the copy-and-paste variety, and most of these are fossils, mutated to the point where they can no longer move about. Although some remnants of cut-and-paste jumping genes have been unearthed in mammals, until now, all of them have been inactive.

Craig’s team made its discovery while studying piggyBac, an active cut-and-paste jumping gene from insects. PiggyBac got its name because it hitched a ride from one host to another on a virus. While studying how the jumping gene works, the researchers also used computational methods to search for piggyBac-like DNA sequences in the genomes of some species, including that of the little brown bat. There they found a sequence similar to piggyBac, one that didn’t appear to have collected mutations that would make it inactive. Sure enough, near-identical copies were sprinkled throughout the genome, indicating that the sequence had jumped relatively recently. Craig named the find piggyBat. Her team also found that piggyBat can move within bat cells, other mammalian cells and yeast, showing that it is indeed a still-active DNA element.

Many organisms have developed systems to decrease the frequency at which jumping genes move, Craig says. Such systems are a component of immunity, protecting mammals from retroviruses, as well as from the risk that jumping genes will wreak havoc by interrupting an important gene.

Over time, the protective systems have made most mammalian jumping genes inactive. The finding that a bat species is host to an exception, combined with the fact that bats are particularly susceptible to viruses, may indicate that the systems that protect us from dangerous genetic material are not as well-developed in bats, Craig says. But whatever the reason for its presence, piggyBat “opens up a window for studying jumping gene regulation in a mammal where the element is still active,” she says.

This future research should yield insights on the workings of jumping genes themselves, as well as on the protective systems that keep them in check, Craig says. Ultimately, her group hopes to custom-design jumping genes that can be used for targeted, safe and effective gene therapy, delivering genes needed to treat disease.

Related Stories:
Q&A with Nancy Craig on remaining “entranced” by the phenomenon of DNA that moves itself around in the genome

Scientists Identify DNA That May Contribute to Each Person's Uniqueness

On the web:
Link to the PNAS article