Understanding of mechanism could lead to new drug treatment
Release Date: May 27, 2014 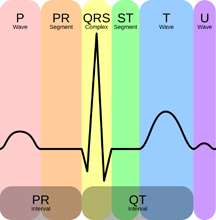 A genetic variant linked to sudden cardiac death leads to protein overproduction in heart cells, Johns Hopkins scientists report. Unlike many known disease-linked variants, this one lies not in a gene but in so-called noncoding DNA, a growing focus of disease research. The discovery, reported in the June 5 issue of The American Journal of Human Genetics, also adds to scientific understanding of the causes of sudden cardiac death and of possible ways to prevent it, the researchers say.

“Traditionally, geneticists have studied gene variants that cause disease by producing an abnormal protein,” says Aravinda Chakravarti, Ph.D., a professor of medicine, pediatrics, molecular biology and genetics, and biostatistics in the McKusick-Nathans Institute of Genetic Medicine at the Johns Hopkins University School of Medicine. “We think there will turn out to be many DNA variants that, like this one, cause disease by making too much or too little of a normal protein.”

Chakravarti’s interest in sudden cardiac death emerged a decade ago, when it claimed several of his colleagues within a few months. An expert in complex common diseases, he and his team knew that sudden cardiac death can be caused by many conditions. They focused on one: abnormalities in what is known as cardiac repolarization — the time it takes for the heart to gear up to beat again.

The team compared the genetic sequences of tens of thousands of people with their electrocardiogram (ECG) results, identifying several regions on the genome with genetic variations associated with lengthened QT interval, a measure of cardiac repolarization, in the ECG. “The problem is that most of these variants lie outside of genes, in the noncoding DNA that controls how genes are used,” Chakravarti says, “so it’s hard to tell what genes they’re affecting.”

Despite the challenge, Chakravarti and his colleagues were able to home in on one suspect region of the genome housing a gene called NOS1AP. “There were many variants grouped in this area,” says Ashish Kapoor, Ph.D., a postdoctoral researcher in Chakravarti’s laboratory, “so we catalogued all 200 that we found.” The team then went through a process of elimination using genetically engineered, lab-grown cells and zebra fish to identify a variant in the noncoding DNA that affected how much protein was made by the nearby NOS1AP gene.

Next, they cultured rat heart cells and engineered them to overproduce NOS1AP. When the concentration of the protein rose in a particular type of heart cell called a cardiomyocyte, the cells’ electrical properties changed in a way that is similar to the pattern seen in long QT syndrome.

Kapoor notes that 67 percent of the general population carries the NOS1AP-overproducing genetic variant. “We have observed that NOS1AP genetic variants are associated with sudden cardiac death whether or not they affect a particular person’s QT interval, raising the risk by about 40 percent,” he says.

Chakravarti notes that the results also add to scientific understanding of how the heart and QT interval work — knowledge with far-reaching implications. For example, many drugs developed for noncardiac conditions have turned out to temporarily lengthen QT interval, a side effect that only turns up after much time and money are spent on drug development. By better understanding regulation of the QT interval, researchers would be better able to predict what types of drugs could affect it.

“Hundreds of genome-wide association studies have been done to find genetic variants associated with disease, but this is one of just a handful of follow-up studies to look for the mechanism behind such a variant,” Chakravarti says. “I think we’ve shown there’s great value in asking why.”

This work was supported by the National Heart, Lung and Blood Institute (grant numbers RO1 HL086694 and RO1HL105993) and the Donald W. Reynolds Foundation. Affymetrix, Inc. sells products used in the study described in this article. Aravinda Chakravarti was a paid consultant to and member of the Scientific Advisory Board of Affymetrix until December 31, 2013. This arrangement has been reviewed and approved by the Johns Hopkins University in accordance with its conflict of interest policies. Mark Ross and David Bentley are employees of Illumina, Inc., a public company that develops and markets systems for genetic analysis.