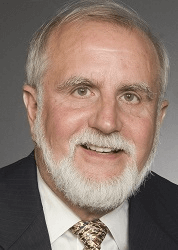 James C. Harris, M.D., a professor of psychiatry and behavioral sciences, the founding director of the Developmental Neuropsychiatry Clinic in the Division of Child and Adolescent Psychiatry at Johns Hopkins, and a former director of the Division of Child and Adolescent Psychiatry, has received the American Psychiatric Association’s 2015 Frank J. Menolascino Award for Psychiatric Services to Persons with Intellectual Development Disorders/Developmental Disabilities. The award, named for a pioneer in the field, is given for lifetime achievement. It will be presented in October at the Institute on Psychiatric Services’ Mental Health Services Conference in New York City.

The award recognizes Harris’ 40 years on the faculty at Johns Hopkins. During those years, he founded the developmental neuropsychiatry program, conducted National Institutes of Health-sponsored research on self-injury in genetic syndromes, and established autism and specialty clinics for children with brain-based behavior problems.

Harris also served on the President’s Committee for Mental Retardation (now the President's Committee for People with Intellectual Disabilities) during the Clinton administration. In 2000, he received the George Tarjan Award for outstanding leadership and continuous contributions in the field of intellectual disability from the American Academy of Child Adolescent Psychiatry. In 2007, he was given the Agnes Purcell McGavin Award for Distinguished Career Achievement from the American Psychiatric Association, and in 2011, he received the Leon Eisenberg Award in the Mental Health and Developmental Disabilities Program at Boston Children’s Hospital and Harvard Medical School.

Of receiving the Menolascino Award, Harris says: “It is a singular honor, and I am grateful to have been chosen to receive it for my lifetime of work with children with intellectual developmental disorders and their families.”