Proteins Hey1 and Hey2 Ensure That Inner Ear 'Hair Cells' Are Made at the Right Time, in the Right Place 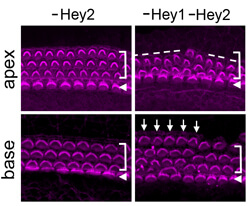 The cochlear hair cells of mice missing just Hey2 are neatly lined up in four rows (left) while those missing Hey1 and Hey2 are disorganized (right). The cells' hairlike protrusions (pink) can be misoriented, too.
Angelika Doetzlhofer

Two Johns Hopkins neuroscientists have discovered the “molecular brakes” that time the generation of important cells in the inner ear cochleas of mice. These “hair cells” translate sound waves into electrical signals that are carried to the brain and are interpreted as sounds. If the arrangement of the cells is disordered, hearing is impaired.

A summary of the research was published in The Journal of Neuroscience on Sept. 16.

“The proteins Hey1 and Hey2 act as brakes to prevent hair cell generation until the time is right,” says Angelika Doetzlhofer, Ph.D., an assistant professor of neuroscience. “Without them, the hair cells end up disorganized and dysfunctional.”

The cochlea is a coiled, fluid-filled structure bordered by a flexible membrane that vibrates when sound waves hit it. This vibration is passed through the fluid in the cochlea and sensed by specialized hair cells that line the tissue in four precise rows. Their name comes from the cells’ hairlike protrusions that detect movement of the cochlear fluid and create electrical signals that relay the sound to the brain.

During development, “parent cells” within the cochlea gradually differentiate into hair cells in a precise sequence, starting with the cells at the base of the cochlea and progressing toward its tip. The signaling protein Sonic Hedgehog was known to be released by nearby nerve cells in a time- and space-dependent pattern that matches that of hair cell differentiation. But the mechanism of Sonic Hedgehog’s action was unclear.

Doetzlhofer and postdoctoral fellow Ana Benito Gonzalez bred mice whose inner ear cells were missing Hey1 and Hey2, two genes known to be active in the parent cells but turned off in hair cells. They found that, without those genes, the cells were generated too early and were abnormally patterned: Rows of hair cells were either too many or too few, and their hairlike protrusions were often deformed and pointing in the wrong direction.

“While these mice didn’t live long enough for us to test their hearing, we know from other studies that mice with disorganized hair cell patterns have serious hearing problems,” says Doetzlhofer.

“Hey1 and Hey2 stop the parent cells from turning into hair cells until the time is right,” explains Doetzlhofer. “Sonic Hedgehog applies those ‘brakes,’ then slowly releases pressure on them as the cochlea develops. If the brakes stop working, the hair cells are generated too early and end up misaligned.”

She adds that Sonic Hedgehog, Hey1 and Hey2 are found in many other parent cell types throughout the developing nervous system and may play similar roles in timing the generation of other cell types.

This work was supported by grants from the Whitehall Foundation (2010-05-81) and the National Institute on Deafness and other Communication Disorders (F32DC013477, DC005211).

We are providing this photo with the understanding that it will be used only to help illustrate the story in the corresponding news release. Please use the provided credit information. If there is anything else you need, please email us at JHMedia@jhmi.edu. Thank you.