Plugging In Your Vision's Autostabilization Feature - 05/07/2015

Plugging In Your Vision's Autostabilization Feature

New study reveals how important neurons find their way from the retina to the inner brain
Release Date: May 7, 2015 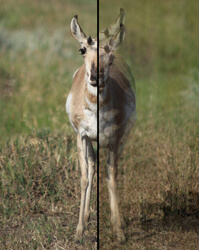 1 2
A pronghorn antelope in the Grand Teton National Park captured by a DSLR camera using the image stabilization function (left). The image on the right was artificially blurred to simulate one’s vision without the work of direction-sensitive ganglion cells.
Lu O. Sun, Johns Hopkins Medicine

Just as most cameras now have an autostabilization feature to compensate for movement during picture taking, our eyes execute an imperceptible reflex that prevents our vision from blurring when we, or our field of vision, are in motion. But before the reflex can work, the wirelike projections, or axons, of specialized nerve cells must find their way from the retina to the correct part of the brain during embryonic development. New research, published online May 7 in the journal Neuron, describes how those axons find their way through the brain’s maze of neurons to make the right connection. The finding has implications for treatment of eye movement disorders and regeneration of damaged vision-sensing nerve cells.

“Without our even knowing it, our eyes are constantly making small movements to keep our vision from getting blurry as we move our heads or as our field of vision moves like when we’re in a moving car,” says Alex Kolodkin, Ph.D., a professor of neuroscience at the Johns Hopkins University School of Medicine and a Howard Hughes Medical Institute investigator. “Our eyes know which adjustments to make, because specialized cells in the retina convey direction specific information to the brain, which then directs appropriate eye movements to compensate. Now we have a better understanding of how the axons from these neurons get to where they need to be.”

The neurons in question are a type of direction-sensitive ganglion cell found in the retina. Each subset of these neurons is in charge of monitoring movements in different directions: vertical, horizontal, forward and backward. For this study, Kolodkin and his group focused on the cells that specifically report slow vertical movement to the brain, like what one would experience looking straight ahead while riding a Ferris wheel. Recent work from another group showed that these cells connect their axons to an area of the brain called the medial terminal nucleus (MTN), but no one knew how they got there during development.

For years, Kolodkin and his group have been studying how nerve cell axons get to where they need to be. As part of this work, they discovered a group of guidance cue proteins called semaphorins (Semas). Knowing from their previous work that the protein Sema6A is required for related connections in the visual system, they started by looking for Sema6A in their vertically sensitive cells. After Lu Sun, Ph.D., the first author of the study, found that it was indeed present on the membranes of the cells, he genetically deleted it in mice to assess its function. The mice showed normal development of the cells during early embryonic development, but the axons couldn’t recognize when they reached their target in the brain, so they retracted, leaving the mice unable to appropriately adjust their eyes as they viewed vertically moving stripes.

If Sema6A was helping guide the axons, there had to be some sort of “bait” in the target region of the brain that the cells could recognize to establish a connection. The Sema6A protein usually interacts with a different class of protein called plexins, so the team looked for plexin proteins in the MTN region of the brain, verifying that they’re there and not in other nearby regions. But something was curious about this. “Normally, Sema6A acts as a bait for plexins,” says Kolodkin. “Not the other way around.”

To find whether the plexins were actually working as bait in this scenario, the team genetically removed them from the retinal neurons while maintaining normal levels of Sema6A. If the axons needed the plexins to guide them to their target, they would fail. But they didn’t: The plexins in the MTN were sufficient to coax the Sema6A-laden axons home. This means that Sema6A acts as a receptor on the cells, recognizing plexins in the target region to allow circuits to be formed, explains Kolodkin.

The researchers hope their work will help us understand eye movement disorders and nerve regeneration. Specifically, their setup using moving stripes and infrared light to monitor eye movement can be used to show whether vision can be restored in mice where nerve regeneration is required following eye injury. In the future, they also plan to study how these circuits ultimately wire up the muscles that control eye movement.

Other authors of the report include Colleen Brady, Hugh Cahill, Timour Al-Khindi and Jeremy Nathans of the Johns Hopkins University School of Medicine; Hiraki Sakuta and Masaharu Noda of the National Institute for Basic Biology in Okazaki, Japan; and Onkar Dhande and Andrew Huberman of the University of California, San Diego.

This work was supported by grants from the National Eye Institute (RO1 EY022157-01), the Pew Charitable Trusts and the Howard Hughes Medical Institute.