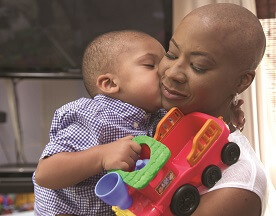 A six-hour PBS documentary series about the story of cancer, including research and treatment, billed by its producers as one of the most comprehensive of its kind yet made, will premiere nationwide March 30, 31 and April 1 featuring several patient stories and interviews conducted with clinicians and scientists at the Johns Hopkins Kimmel Cancer Center.
Ken Burns Presents Cancer: The Emperor of All Maladies, A Film by Barak Goodman is based on the Pulitzer Prize-winning book by Siddhartha Mukherjee, M.D., Ph.D., and directed by award-winning filmmaker Barak Goodman, along with Deborah Dickson, Chris Durrance and Jack Youngelson. The series is executive produced by renowned documentarian Ken Burns, who also served as senior creative consultant on the project. The series, filmed in part at Johns Hopkins over an 18-month period, will air in three two-hour episodes at 9 p.m. EDT each night. More information is available at cancerfilms.org.
“Because cancer is so feared and is now ranked by the World Health Organization as the deadliest of all diseases, we participated in this documentary to shine a light on the people working to cure and prevent it, and to help patients and families tell their stories,” says William Nelson, M.D., Ph.D., director of the Kimmel Cancer Center.
A team of “embedded” documentarians worked periodically at the Cancer Center from October 2012 through the spring of 2014, filming a diverse group of clinicians and patients in their daily journey with cancer. Johns Hopkins’ experience in hosting documentary and cinema verite projects was one factor in the decision to bring documentary crews to the institution, according to the filmmakers, who say they shot hundreds of hours of footage. Documentarians also embedded at the Charleston Area Medical Center in West Virginia.
“Johns Hopkins gave the crew unprecedented access because of PBS’ commitment of resources, talent and history of exceptional documentary work,” Nelson explains, adding he was gratified by the “generous spirit of our faculty, nurses, staff and patients in their efforts to provide a realistic portrait of cancer.”
“We’ve come far in preventing and treating cancer,” Nelson says, “yet there is still much further we need to go.”
“This film has the potential to reshape the way the public sees cancer and strip away some of the fear and misunderstanding that has long surrounded it,” says Goodman, co-founder of Ark Media and producer and director of Scottsboro: An American Tragedy and Clinton, among other notable documentaries. “Ultimately, we hope the public comes away with a sense of hope and inspiration about the future direction of cancer research and treatment.”
The documentary is based on The Emperor of All Maladies: A Biography of Cancer, written by Mukherjee, a cancer physician and researcher at Columbia University in New York, who was inspired to write the book when confronted with a patient’s question about the nature of her cancer.
Financial support for the film was provided by Genentech, Cancer Treatment Centers of America, Siemens, David H. Koch, Bristol-Myers Squibb, the Alfred P. Sloan Foundation, the Kovler Fund, The Arthur Vining Davis Foundations, American Association for Cancer Research, the American Cancer Society, The Leukemia & Lymphoma Society, Stand Up to Cancer (SU2C), a program of the Entertainment Industry Foundation, the Corporation for Public Broadcasting and PBS. Johns Hopkins did not provide financial support or receive compensation for participating in the project.