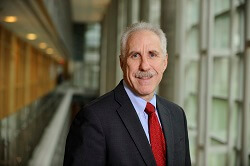 “Over the past five years, Dr. Rothman has provided exceptional leadership, advancing our clinical, research and educational missions in the midst of a turbulent landscape for academic medicine,” Daniels said this morning. “Conversations with students, faculty, staff and administrators throughout Johns Hopkins Medicine confirmed our strong belief that Paul possesses and articulates a sharp and nuanced understanding of this institution’s role in delivering the highest quality care to patients, producing new discoveries, embracing research agendas that are critical to the health of the world and educating the next generation of premier clinicians and scientists.”

Since joining Johns Hopkins from the University of Iowa in 2012, Rothman has initiated the development and implementation of Johns Hopkins Medicine’s first enterprise-wide strategic plan, providing key guidance on the shared principles and aspirations that help align and integrate Johns Hopkins Medicine. He worked closely with Johns Hopkins Health System President and Johns Hopkins Medicine Executive Vice President Ronald R. Peterson and other key colleagues to implement key operational changes, including the successful rollout of an electronic medical records system and the smooth transition to the Charlotte R. Bloomberg Children’s Center and the Sheikh Zayed Tower, state-of-the-art clinical facilities.

Daniels continued: “Dr. Rothman has made substantial investments in precision medicine, while simultaneously developing centers of excellence that will apply these principles to medical practice, advancing our potential to fundamentally improve patient outcomes.”

At a time when funding has been constrained, Rothman has demonstrated an unwavering commitment to research and discovery. He has partnered with fellow deans and directors to foster university-wide support for early and mid-career scientists, investments that have led to new NIH grants and novel collaborations across divisions. Under his leadership, the school of medicine supported the 2015 launch of Johns Hopkins Technology Ventures to aid faculty, students and staff in translating their discoveries into market-ready treatments. Rothman has also worked to drive the Bloomberg Distinguished Professorship program, recruiting world-class interdisciplinary researchers and clinicians.

“During the reappointment evaluation process, colleagues from across our institution described Dr. Rothman as the consummate clinician-scientist,” Daniels said. “They described a leader who has the skill and vision to see and advance priorities in both research and clinical practice without losing sight of the joy of medicine. He is an exemplary partner and colleague, and we are delighted that our health system, our university, and our school of medicine will benefit from his continued leadership over the next six years.”

Rothman is the Frances Watt Baker, M.D., and Lenox D. Baker Jr., M.D., Dean of the Medical Faculty; vice president for medicine of The Johns Hopkins University; and CEO of Johns Hopkins Medicine. As dean/CEO, Dr. Rothman oversees both the school of medicine and the Johns Hopkins Health System, which encompasses six hospitals, hundreds of community physicians and a self-funded health plan.

The New York City native began his research career as an undergraduate at the Massachusetts Institute of Technology, where he studied E. coli DNA repair under Graham C. Walker. He earned his medical degree from Yale University in 1984 and was a member of the prestigious Alpha Omega Alpha Honor Medical Society.

He did a medical residency and rheumatology fellowship at New York’s Columbia-Presbyterian Medical Center before joining the medical faculty of the Columbia University College of Physicians and Surgeons in 1986. There, he also completed a postdoctoral biochemistry fellowship with Frederick W. Alt, a Howard Hughes Medical Institute investigator, studying immunoglobulin class-switch recombination. At Columbia, Dr. Rothman rose to become the Richard J. Stock Professor of Medicine (Immunology) and Microbiology and chief of the pulmonary, allergy and critical care divisions.

A molecular immunologist, Dr. Rothman’s research focused on immune system molecules known as cytokines. Specifically, he investigated the role these molecules play in the normal development of blood cells and the abnormal blood-cell development that leads to leukemia. He also studied the function of cytokines in immune system responses to asthma and allergies. His work was consistently funded by the National Institutes of Health.

Dr. Rothman’s honors include a James S. McDonnell Foundation Career Development Award, a Pfizer Scholars Award, a Pew Scholar in the Biomedical Sciences Award, a Leukemia Society of America Scholar Award and the Pharmacia Allergy Research Foundation International Award. He is a member of the American Society for Clinical Investigation and is a fellow of the American College of Physicians. He was elected to the National Academy of Medicine in 2016, one of the highest honors in the fields of health and medicine, recognizing individuals who have demonstrated outstanding professional achievements and commitment to service. He was also elected as a fellow of the American Association for the Advancement of Sciences and as a member of the American Clinical and Climatological Association. He served as president of the Association of American Physicians for 2014–15.

Dr. Rothman is a member of the Merck board of directors and receives compensation in the form of income and stock.