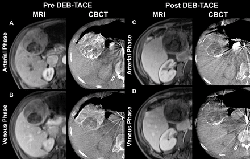 Specialized DPCBCT scans of a liver tumor in a 73 year old man before and after chemoembolization (second and fourth column from left) match up closely with MRI scans taken over a month later (first and third columns).

Using two successive pairs of specialized CT scans, a team of Johns Hopkins and Dutch radiologists has produced real-time images of liver tumors dying from direct injection of anticancer drugs into the tumors and their surrounding blood vessels. Within a minute, the images showed whether the targeted chemotherapy did or did not choke off the tumors' blood supply and saved patients a month of worry about whether the treatment, known as chemoembolization, was working or not, and whether repeat or more powerful treatments were needed.

The Johns Hopkins team's report about this novel use of dual-phase cone-bean computed tomography, or DPCBCT, an imaging technique developed at Johns Hopkins, is set to appear in the January 2013 edition of the journal Radiology. The diagnostic scans were performed on 27 men and women with inoperable liver cancer.

"This new scanning method is giving us almost instant feedback about the value of injecting antitumor drugs directly into large liver tumors and their surrounding blood vessels in an effort to quickly kill them, and to prevent the cancer from spreading," says senior study investigator and interventional radiologist Jean-Francois Geschwind, M.D.

Geschwind says if further testing proves equally successful, the paired use of cone-beam CT scans, which are already approved for single-scan use by the U.S. Food and Drug Administration, could supplant the current practice of MRI scanning a month after chemoembolization to check its effects.

"Patients should not have to endure the uncertainty of waiting weeks or more to find out if their chemoembolization was successful in fighting their liver cancer," says Geschwind, a professor in the Russell H. Morgan Department of Radiology at the Johns Hopkins University School of Medicine and its Kimmel Cancer Center.

"Dual-phase cone-beam CT avoids such delays, which also could allow the cancer to grow and spread and, ultimately, compromise chances of remission," he says.

Avoiding delays is particularly important, he says, for people with moderate to advanced stages of the disease, when liver tumors are too large or too numerous to surgically remove, and for whom chemoembolization is the main treatment option. Half of such liver cancer patients succumb within nine months, and liver transplantation is only an option for a quarter of those whose tumors have not spread outside the liver.

The newer DPCBCT scans, in which X-rays are detected by a device the size of a large laptop that can be placed directly below or above the operating room table, have the added advantage of being performed in the same room, or interventional radiology suite, as patients getting chemoembolization.

In their new study, Geschwind and his colleagues found that the initial shrinkage seen with DPCBCT scans taken before and after chemoembolization matched up almost perfectly with MRI scans taken a month later. Tumor death was 95 percent, the same as that seen by MRI. A total of 47 tumors were closely monitored in the study to assess how well DPCBCT tracked tumor death after chemoembolization. All study participants were treated at The Johns Hopkins Hospital between March and December 2009.

In DPCBCT scanning, a chemical contrast dye is injected into the artery that supplies blood flow to the liver and tumor right before the chemotherapy drug is injected, to enhance the X-ray image. The first set of scans highlights key blood vessels feeding the tumor, as dye flows in and out of the tumor. The second set of scans is performed immediately after chemoembolization, to gauge tumor and key blood vessel death. Computer software is used to sharpen and analyze differences between the images.

The entire DPCBCT scanning time, researchers say, is between 20 seconds and 30 seconds, and the total amount of radiation exposure from the dual scanning averages 3.08 milliseiverts, which is less than half the amount of radiation involved in a modern abdominal 64-CT scan. Cone-beam CT scanners also emit an X-ray, but unlike other CT scanners, the cone-beam type of X-ray is projected onto one large, rectangular detector, roughly a foot and a half long -- and produces a telltale conical shape. The size of the cone-beam CT detector allows for single scans that can capture images the size of most people's entire liver. More powerful 64-CT and 320-CT scanners involve multiple detector rows.

Chemoembolization entails the use of tiny beads containing the chemotherapy drug doxorubicin injected directly into liver tumors. Ultrathin catheters, about the width of a human hair, are threaded through blood vessels to deliver the drugs, which seep from the beads for several weeks.

Geschwind is leading clinical trials under way at Johns Hopkins and other centers to assess whether the combination drug treatment works for liver cancer patients. Early results have shown promise, with patients with advanced disease living 10 months to 15 months longer.

Geschwind says they plan improvements in image quality in DPCBCT scans, hoping further refinements will encourage physicians to adopt the technique. They also plan updates to the navigational software that, like GPS, can track blood vessels feeding each tumor, and provide more precise and greater numbers of targets.

Liver cancer kills nearly 20,000 Americans each year, and is much more prevalent outside the United States, where it is among the top three causes of cancer death in the world. Experts cite the rising numbers of hepatitis C infections, which cause chronic liver inflammation and are a leading risk factor for liver cancer.

Funding support for this study was provided by the French Society of Radiology and Philips Research North America in Briarcliff Manor, N.Y. Philips, whose parent company is based in the Netherlands, manufactures the CBCT device used in the study. Additional funding support was provided by the U.S. National Cancer Institute, a member of the National Institutes of Health. The corresponding grant numbers are NCI R01-CA160771 and UL1 RR-025005.

The study lead investigators were Romaric Loffroy, M.D., a radiology fellow at Johns Hopkins, and MingDe Lin, Ph.D., a Philips biomedical engineer based at Johns Hopkins who has been collaborating with Geschwind for the past five years to perfect the DPCBCT technique.

In addition to Geschwind, Loffroy and Lin, other Johns Hopkins researchers involved in this research were Gayane Yenokyan, Ph.D., at the university's Bloomberg School of Public Health; and Pramod Rao, M.D.; Nikhil Bhagat, M.D.; and Eleni Liapi, M.D., all at the School of Medicine. Philips investigators involved were Niels Noordhoek, Ph.D.; Alessandro Radaelli, Ph.D.; and Jarl Blijd, M.Sc.

The chemoembolization research study was funded by Bayer HealthCare and Onyx Pharmaceuticals, manufacturer of sorafenib, and Biocompatibles, makers of the microbeads. Geschwind is a consultant to Bayer HealthCare Pharmaceuticals, and to Biocompatibles. The terms of these arrangements are being managed by The Johns Hopkins University in accordance with its conflict-of-interest policies.

Photos of DPCBCT scans can be found online at:
http://www.hopkinsmedicine.org