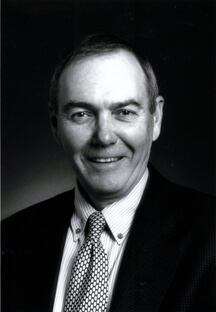 M. Daniel Lane, a Johns Hopkins biochemist renowned for his groundbreaking studies of the chemical processes within the human body that affect hunger, the feeling of fullness and obesity, as well as for his warmth and brilliance as a scientific mentor to generations of Hopkins researchers—including a future Nobel Prize winner—died at his Baltimore home on April 10 of myeloma. He was 83.

Among those whom Lane mentored was Peter Agre, winner of the 2003 Nobel Prize in Chemistry for his discovery of aquaporins, the proteins that form the previously elusive channels through which water enters and leaves cells.

“Dan was very generous to fledgling young scientists,” Agre says.  “In 1993, I was a medical doctor attempting to survive in the highly competitive world of basic science. My tiny lab group was programmed to return to clinical research space at a vulnerable time. Dan took a genuine interest in my well-being and the crazy project we were pursuing—a protein that might be a water channel.

Dan invited us to join the Department of Biological Chemistry and even gave us the famous Lehninger laboratory,” the research space previously used by Albert Lehninger (1917-1986), a Johns Hopkins biochemistry leader famed for his research on metabolism.

“Dan’s support and guidance were pivotal, landing me the 2003 Nobel Prize in Chemistry,” Agre says. One of his “favorite memories,” he adds, was of Lane and his wife, Patricia, “celebrating with us in Stockholm.”

Paul Rothman, dean of the medical faculty and CEO of Johns Hopkins Medicine, called Lane “a premier scientist and one of our most cherished colleagues.” He notes that Lane made numerous important contributions to the field of biochemistry, particularly to researchers’ understanding the work of enzymes—the proteins that facilitate nearly all of the body’s biochemical processes. He also made discoveries related to how the body makes and uses fats, how different types of fat cells come about, and which chemical signals determine when we feel hungry and full. His work has had a profound impact on understanding of obesity.

Lane’s “kindness and scientific acumen” made him one of the world’s “most well-respected contemporary scientists,” Rothman says, and his “formal teaching skills were unmatched as well.”

“Every physician who trained at Johns Hopkins from 1970 until 2006, when he formally stopped teaching, remembers the ‘Lane Lectures’ in metabolism,” Rothman notes.

A child of Danish immigrants, Lane was born in Chicago in 1930 and obtained his undergraduate and master’s degrees at Iowa State University and his Ph.D. in biochemistry from the University of Illinois at Urbana-Champaign in 1956.

He joined the faculty of Virginia Polytechnic Institute and State University in Blacksburg, Va., where he quickly rose in the academic ranks, becoming a full professor of biochemistry in 1963. He joined the biochemistry department at New York University in 1964, and in 1969 he was recruited by Albert Lehninger to join what then was known as the Department of Physiological Chemistry at Johns Hopkins. He succeeded Lehninger as head of the department in 1978 and changed its name to the Department of Biological Chemistry.

After stepping down as head of the department in 1997, Lane remained active as a teacher and researcher. A prolific writer, he published more than 320 peer-reviewed articles in scientific journals. He was named a University Distinguished Service Professor, the highest academic title, in 2001 and an emeritus professor in 2008, when he officially closed his laboratory.

He also held many leadership posts in the American Society for Biochemistry and Molecular Biology, including a one-year term as its president from 1990 to 1991.

Colleagues and friends also knew Lane as a champion of human rights, actively involved in efforts to address injustices.

An engaging conversationalist with a vibrant sense of humor, he was an avid outdoorsman and dedicated fisherman who would happily talk for hours, if prompted, about his most recent fishing excursions. In 2012, at the age of 81, he skippered his boat on a 450-mile sea voyage from the Chesapeake Bay to Martha’s Vineyard to go fishing. Aside from photos of his family, his office was decorated with pictures of the fish he had caught—some jokingly enhanced by computer photo-shopping.

Lane’s wife, the former Patricia Sonquist, died in 2010. He is survived by his daughter, Claudia Lane, of Baltimore; his son, M. Daniel Lane Jr., of London, the United Kingdom; a sister, Alice Lane White, of Dartmouth, Nova Scotia; four grandchildren and three great grandchildren. The family will notify guests for the Memorial Event shortly. In lieu of flowers, memorial contributions may be made to the M. Daniel and Patricia Sonquist Lane Endowed Lectureship Fund or to the graduate program in biological chemistry at Johns Hopkins.

We are providing this photo/video with the understanding that it will be used only to help illustrate the story in the corresponding news release. If there is anything else you need, please email us at JHMedia@jhmi.edu. Thank you.