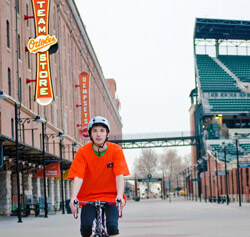 A 24-year-old hearing-impaired baseball fan from Annapolis, Md., hopes to raise $1 million to help others facing hearing loss, so they too can experience in what he calls his "miracle," the cochlear implant performed at The Johns Hopkins Hospital in 1999 that restored much of his hearing when he was 10 years old.

The young pizza baker, Jacob Landis, is placing a constructive hold on his college plans while he combines his passion for America's national pastime with his love of bicycling so that he can give back to people like him. His personal mission: to raise funds while bicycling to all 30 Major League Baseball stadiums during the 2013 season.

The cross-country tour, aptly named Jacob's Ride, rolls out Wednesday, April 3, at Nationals Park in Washington, D.C., before moving to Camden Yards in Baltimore - home to Landis' favorite team, the Orioles - on Saturday, April 6. Baseball teams in most cities plan to formally welcome and recognize Landis, who will be accompanied at each game by as many as 150 local supporters and fellow cyclists. He also will throw the first pitch at some games along the route. Jacob's Ride then moves west past the Great Lakes, returning east across a southern route, before finishing in Miami on Sept. 24. In recognition of his efforts, Landis was named a "goodwill ambassador" for the City of Annapolis for the summer.

All told, Landis' charity bike ride will take six months, and cover more than 10,500 miles in 175 days, he says. His million-dollar goal is designed to benefit those who need financial support to purchase a cochlear implant, or other kind of hearing-assist device, including hearing aids. Landis says that modern hearing devices like his, recently upgraded to include a remote-controlled computer that rests behind his ear, in addition to language rehabilitation therapy, needed especially by children, can cost upwards of $100,000, a sum he knows is beyond the health insurance coverage and resources of many families.

Donations to Jacobs Ride can be made through his website, www.jacobsride.com, his Facebook page, and through text message and mobile phone announcements at all stadiums he visits, as well as with bike team sponsorships and fund-raising events planned along the ride route.

All proceeds will benefit The Gift of Hearing Foundation in Narragansett, R.I.; The Listening Center in the Department of Otolaryngology - Head and Neck Surgery at the Johns Hopkins University School of Medicine in Baltimore, Md.; the Mayo Clinic in Rochester, Minn.; and the J.W. Pickle Foundation in Nashville, Tenn.

"Hearing loss is a prevalent medical condition with serious psychosocial consequences for many as 32 million infants, children and adults in the United States," says Howard Francis, M.D., an associate professor of otolaryngology - head and neck surgery at Johns Hopkins and director of The Listening Center. "Jacob's Ride is important to raising awareness about the condition and, I think, in celebrating his success in overcoming a debilitating condition that restricts achievement and social connection in the hearing world. I can only hope that many other people will be inspired by his young spirit and courage in what will certainly be a physically grueling and emotionally taxing national tour."

Francis says cochlear implants are the most successful medical intervention for the profoundly deaf or severely hard-of-hearing. He says that while cochlear implants do not restore normal hearing, their activation gives deaf people who qualify for the devices a useful representation of sounds in the environment and helps them better understand speech.

For children, intensive post-implant therapy helps them gain access to sound, and acquire speech and social skills over time. For adults who have lost all or most of their hearing later in life, he says the devices help them learn to associate the signal provided by an implant with sounds they remember.

Francis and his colleagues at The Listening Center have performed nearly 3,000 of the roughly two-hour, outpatient surgeries to connect the requisite devices, which consist of a microphone and speech processor worn outside of the ear to collect sound and speech information. These devices are connected to a processing component surgically implanted on the outer surface of the skull and within the inner ear, which sends an electrical signal to the brain via the auditory nerve.

Since his surgery, Landis has been an "unofficial ambassador," speaking to youth groups and other patients about his restored hearing. He says that by the end of Jacob's Ride, he expects to have helped dozens, possibly hundreds, of people obtain hearing devices that they might have otherwise gone without. He also hopes to inspire thousands to take up his cause and raise additional funds. On a personal note, Landis says he expects to be a very different person and to have matured a lot by the end of Jacob's Ride. And, he says, one thing is absolutely certain: "The O's are going to win the World Series!"