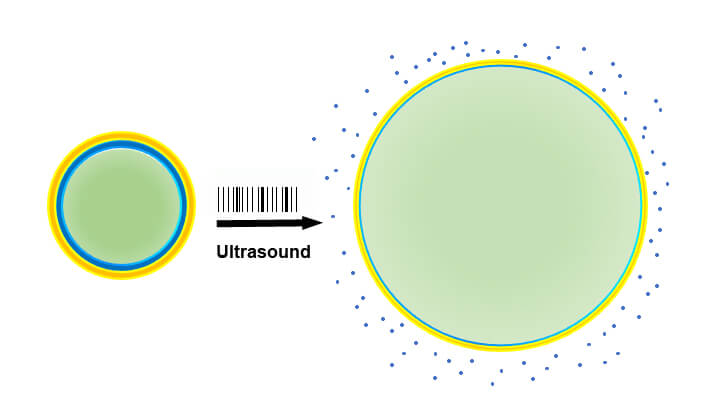 Biomedical engineers at Johns Hopkins report they have worked out a noninvasive way to release and deliver concentrated amounts of a drug to the brain of rats in a temporary, localized manner using ultrasound. The method first “cages” a drug inside tiny, biodegradable “nanoparticles,” then activates its release through precisely targeted sound waves, such as those used to painlessly and noninvasively create images of internal organs.

Because most psychoactive drugs could be delivered this way, as well as many other types of drugs, the researchers say their method has the potential to advance many therapies and research studies inside and outside the brain.

They also say that their method should minimize a drug’s side effects because the drug’s release is concentrated in a small area of the body, so the total amount of drug administered can be much lower. And because the individual components of the technology — including the use of the specific biomaterials, ultrasound and FDA-approved drugs — have already been tested in people and found to be safe, the researchers believe their method could be brought into clinical use more quickly than usual: They hope to start the regulatory approval process within the next year or two.

“If further testing of our combination method works in humans, it will not only give us a way to direct medications to specific areas of the brain, but will also let us learn a lot more about the function of each brain area,” says Jordan Green, Ph.D., associate professor of biomedical engineering, who is also a member of the Kimmel Cancer Center and the Institute for Nanobiotechnology.

Details of the research are published on Jan. 23 in the journal Nano Letters.

The new research, Green says, was designed to further advance means of getting drugs safely to the brain, a delicate and challenging organ to treat. To protect itself from infectious agents — and from swelling that can be caused by the immune system, for example — the brain is surrounded by a molecular fence, called the blood-brain barrier (BBB), which lines the surface of every blood vessel feeding the brain. Only very small drug molecules that dissolve in oil can get through the fence, along with gases. Because of this, most drugs developed for treating brain disorders fit those criteria but are dispersed to all parts of the brain — and the rest of the body, where they may be unneeded and unwanted.

Raag Airan, M.D., Ph.D., assistant professor of radiology at Stanford University School of Medicine and co-author of the paper, says: “When working with a patient who has post-traumatic stress disorder, for example, it would be nice to quiet down the overactive part of the brain — for instance, the amygdala — during talk therapy sessions. Current technologies can at best quiet down half of the brain at a time, so they are too nonspecific to be useful in this setting.”

In the new study, the researchers took a cue from previous use of nanoparticles and ultrasound to deliver chemotherapeutic drugs to tumors under the skin. In their latest experiments, Green’s group designed nanoparticles with an outer expandable “cage” made of a biodegradable plastic, whose molecular building blocks are oil-loving at one end and water-loving at the other. The oil-loving ends cling together and form an expandable sphere with the water-loving ends on the outside. The oil-loving ends bind the drug to be delivered, which in this case was propofol, an anesthetic commonly used to treat seizures in people.

Before testing their idea on animals, Green and his colleagues fine-tuned their ultrasound protocol by testing nanoparticles in plastic tubes, seeking to pinpoint pulses of the right power and frequency to release adequate amounts of the drug without being strong enough to damage the BBB, a known effect of high-powered ultrasound.

They also tested the distribution of the nanoparticles in rats by adding a fluorescent dye to the particles and measuring the amount of dye found in blood and organ samples over time. The majority of the particles ended up in the spleen and liver, which are important housekeeping organs in the body. As expected, particles were not found in the brain because they are too big to pass through the BBB. Instead, the researchers were relying on propofol’s own ability to pass through the BBB once released locally from the nanoparticles.

To see whether their method could provide medical relief to live animals, they then gave rats a drug that causes seizures, followed by the propofol-laden nanoparticles. They used MRI to guide their application of the ultrasound to the rat brain and thus release the drug from nanoparticles floating through infiltrating blood vessels. As soon as they applied the ultrasound, the seizure activity of the rats calmed down.

“These experiments show the effectiveness of this method to manipulate the function of brain cells through the precise delivery of drugs,” says Green. “In humans, ultrasound machines can target a volume as small as a few millimeters cubed, less than one ten-thousandth of the brain.”

Airan, who was doing his fellowship and residency at The Johns Hopkins Hospital during the study, says that one of the most promising, immediate applications of the new technology could be for the “brain mapping” required before many neurosurgeries. Before a surgeon cuts into the brain to remove a tumor, for example, he or she needs to know where not to cut. “Currently, that requires keeping the patient awake, while the surgeon exposes the brain and probes it with electrodes while assessing responses. The ultrasound method would allow us to use a drug like propofol to briefly ‘turn off’ specific areas of the brain one at a time, prior to the surgery, with nothing more invasive than a needle stick,” he says.

Because ultrasound, MRI and each component of the nanoparticles have been approved for other uses in humans, the researchers expect a short timeline to get their idea to patients, but they acknowledge that its applications will be somewhat limited by the cost and accessibility of MRI scans — at least in the short term.

“Our current model requires real-time imaging of the brain while the ultrasound is being applied,” says Airan. “Based on similar procedures I already do, that could cost up to $30,000 to $50,000. But we’re working on software that would allow us to synchronize a single MRI image with the ultrasound guidance system to decrease the cost significantly.”

Meanwhile, the researchers believe it will still be clinically relevant in many situations where a drug’s effects are known to last for weeks. They also expect it to be widely used in brain research to study and manipulate the function of specific areas of the brain in a controlled manner.

Other authors of the report include Randall Meyer, Nicholas Ellens, Kelly Rhodes, Keyvan Farahani, Martin Pomper and Shilpa Kadam of the Johns Hopkins University School of Medicine; Pomper is also a member of the Kimmel Cancer Center and the Institute for Nanobiotechnology, and Farahani is also part of the National Cancer Institute.