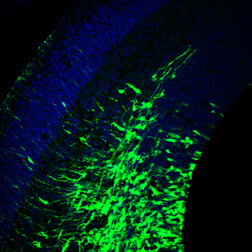 Johns Hopkins researchers report they have figured out how the aptly named protein Botch blocks the signaling protein called Notch, which helps regulate development. In a report on the discovery, to appear online April 24 in the journal Cell Reports, the scientists say they expect the work to lead to a better understanding of how a single protein, Notch, directs actions needed for the healthy development of organs as diverse as brains and kidneys.

The Johns Hopkins team says their experiments show that Botch uses a never-before-seen mechanism, replacing one chemical group with another that physically blocks the action of another enzyme. “We knew that Botch regulated Notch, and now we know it has its own novel way of getting the job done,” says Valina Dawson, Ph.D., professor of neurology in the Johns Hopkins University School of Medicine’s Institute for Cell Engineering, who led the study. “What’s surprising is that Botch doesn’t pull from the usual toolkit of enzymatic mechanisms.”

Notch is, in fact, a family of four proteins with nearly identical properties and actions in mice and men. The proteins, Dawson says, dwell in the membranes surrounding cells, where they act as receptors, responding to specific signals outside of the cells by starting a chain reaction of signals inside. “There’s a laundry list of things Notch does, from getting stem cells to develop into different organs to helping produce red blood cells,” Dawson says. “The big question is how a seemingly simple signaling system could have such different effects.”

The research team led by Dawson and her husband and collaborator, Ted Dawson, M.D., Ph.D., discovered Botch while looking for proteins that could protect the brain from injury. Since it was a newly found protein, they looked for answers on how Botch functions by finding other proteins with which it could interact, and that resulted in discovering Notch.

After Notch emerges from one of the cell’s protein manufacturing centers, several things have to happen before it can go to work in the cell membrane. One of these is the addition of the chemical group glycine to a specific part of the protein. After that, an enzyme called furin cuts Notch near the glycine site. Botch removes the glycine from the spot where furin cuts. More surprisingly, Valina Dawson says, Botch then replaces the glycine with another chemical group that blocks furin from getting to the cut site. “Researchers are used to seeing enzymes change other proteins’ function through common mechanisms, like adding or subtracting a phosphate group,” Dawson says. “But Botch uses a tactic that no one has reported seeing before: It lops off glycine and adds a chemical structure called 5-oxy-proline.”

Now that scientists know what to look for, they’ll likely be able to identify other enzymes that use the same trick, Dawson says, and Botch itself may turn out to have other target proteins. Knowing how Botch works on Notch contributes to scientists’ understanding of the biochemistry of development. It may also have implications for the treatment of some leukemias that have been linked to a mutation in the area of Notch close to the Botch-targeted glycine, Dawson adds.

We are providing this photo/video with the understanding that it will be used only to help illustrate the story in the corresponding news release. Please also find appropriate credit information with caption in the press release. If there is anything else you need, please email us at JHMedia@jhmi.edu. Thank you.