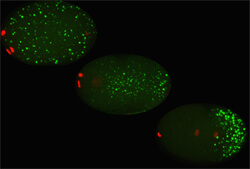 Organization is key to an efficient workplace, and cells are no exception to this rule. New evidence from Johns Hopkins researchers suggests that, in addition to membranes, cells have another way to keep their contents and activities separate: with ribbons of spinning proteins. A summary of their findings appears today in the journal eLife.

Each cell is a busy warehouse of activity. To keep things orderly, protein workers are “assigned” to specific areas of the cell where other workers are collaborating on the same project. Most of the project areas, or organelles, in the cell are cordoned off by flexible membranes that let things in and out on an as-needed basis, but some organelles, like RNA granules, do not seem to have clear boundaries.

RNA granules float throughout the watery space inside the cell and are responsible for transporting, storing and controlling RNA — DNA’s chemical cousin — which holds blueprints for proteins. Until now, researchers thought that the granules didn’t have concrete edges to separate them from the space outside.

“Before, the thinking was that RNA granules were like oil in water,” says Geraldine Seydoux, Ph.D., a Howard Hughes investigator and professor of molecular biology and genetics at the Johns Hopkins University School of Medicine. “Oil molecules create droplets because they are attracted to themselves, and so they are able to separate from surrounding water. Now we know that the separation of RNA granules from their watery surroundings is facilitated by a dynamic envelope that stabilizes them.”

Seydoux and her team worked with Eric Betzig, Ph.D., of Janelia Farm, who uses a state-of-the-art microscope that can detect rapidly moving particles. That microscope was key to detecting the irregularly shaped protein “cages” that surround the granules because they are constantly orbiting. When the researchers identified the proteins that create the cages, they were further surprised to find that the proteins are predicted not to interact with RNA and are rarely folded as most proteins are.

Seydoux says there are many questions left open about the nature of these protein cages and the RNA granules they surround, but “it is quite exciting to have discovered a new way that cells organize their contents.”

This work was supported by the National Institute of Child Health and Human Development (R01HD37047) and the Howard Hughes Medical Institute.

A photo and video accompany this story and are available for download.