New Insight into the Neuroscience of Choking under Pressure 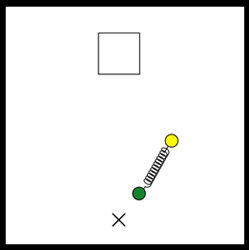 A diagram of the skilled task; the “x” is the start position. The object of the task is to move both dots into the square within two seconds. This is challenging, because moving the cursor only controls the green “ball;” the yellow “ball” is attached to it via a virtual spring. When you move your hand toward the target, the yellow ball oscillates.
Vikram Chib, Johns Hopkins Medicine

Everyone knows the scene: a basketball player at the free throw line, bouncing the ball as he concentrates on the basket. It’s a tight game, and his team needs this point. He regularly makes baskets from much farther away while avoiding defenders, but now, when all is calm, he chokes and misses the basket, and his team loses. Recent research from The Johns Hopkins University suggests that in situations like this, performance depends on two factors: the framing of the incentive in terms of a loss or a gain, and a person’s aversion to loss.

“We can measure someone’s loss aversion and then frame the task in a way that might help them avoid choking under pressure,” says Vikram Chib, Ph.D., assistant professor of biomedical engineering at the Johns Hopkins University School of Medicine.

The results of the study, published online in The Journal of Neuroscience on Nov. 5, are counterintuitive. Those with high loss aversion choked when told they stood to gain a lot, while those with low loss aversion choked under the pressure of large prospective losses. By monitoring the participants’ brain activity as they were presented with incentives and then performed a skilled movement task, the researchers found that performance is influenced by a brain area called the ventral striatum.

Twenty-six participants, 20 to 30 years old, came in for testing on two consecutive days. On the first day, they learned a brief but challenging video game that required precise hand control. The difficulty of the game was then modified according to the ability of the player so that the task was equally difficult for each participant.

On the second day, the participants were given $100 in cash and then placed in an MRI machine to play the game. Before each round of the two-second game, they were told what the stakes were for that round — anything from losing $100 to gaining $100. At the end of 300 rounds, one round would randomly be chosen and used to calculate the participant’s take-home amount, so it was in the participants’ interest to do their best on each trial. Finally, in a separate test, each participant was asked whether or not they would take 140 specific coin toss gambles for varying amounts of money; for example, if the toss of a coin would determine your chance of winning $4 or losing $2, would you take the gamble? Each person’s yes or no answers were used to calculate their loss aversion.

“We found that the way we framed an incentive — as a potential gain or loss — had a profound effect on participants’ behavior as they performed the skilled task,” says Chib. “But the effect was different for those with high versus low aversion to loss.”

To see what was going on in the brain through all of this, the researchers used MRI imaging of subjects as they played the game. They focused on the ventral striatum, a small area of the brain that processes reward but is also known to help control movement.

When an incentive was initially presented to participants, the activity of their ventral striatum increased with the magnitude of the stakes, whether framed as potential gains or losses. Differences emerged between the two categories of participants as they played the game. Those who were more loss averse had lower striatal activity and performed worse when playing for large potential gains; people who were less loss averse had less striatal activity and worse performance when they were trying to avoid large potential losses.

Chib believes that these results confirm that the ventral striatum is the interface between incentive-driven motivation and execution of physical performance, and he hopes these insights could help coaches and others to work with — or overcome — people’s loss aversion in order to maximize their performance. More importantly than playing sports, the insights could help people taking important tests, pilots flying under dangerous conditions or surgeons performing difficult procedures.

Other authors of the report include Shinsuke Shimojo and John O’Doherty of the California Institute of Technology.