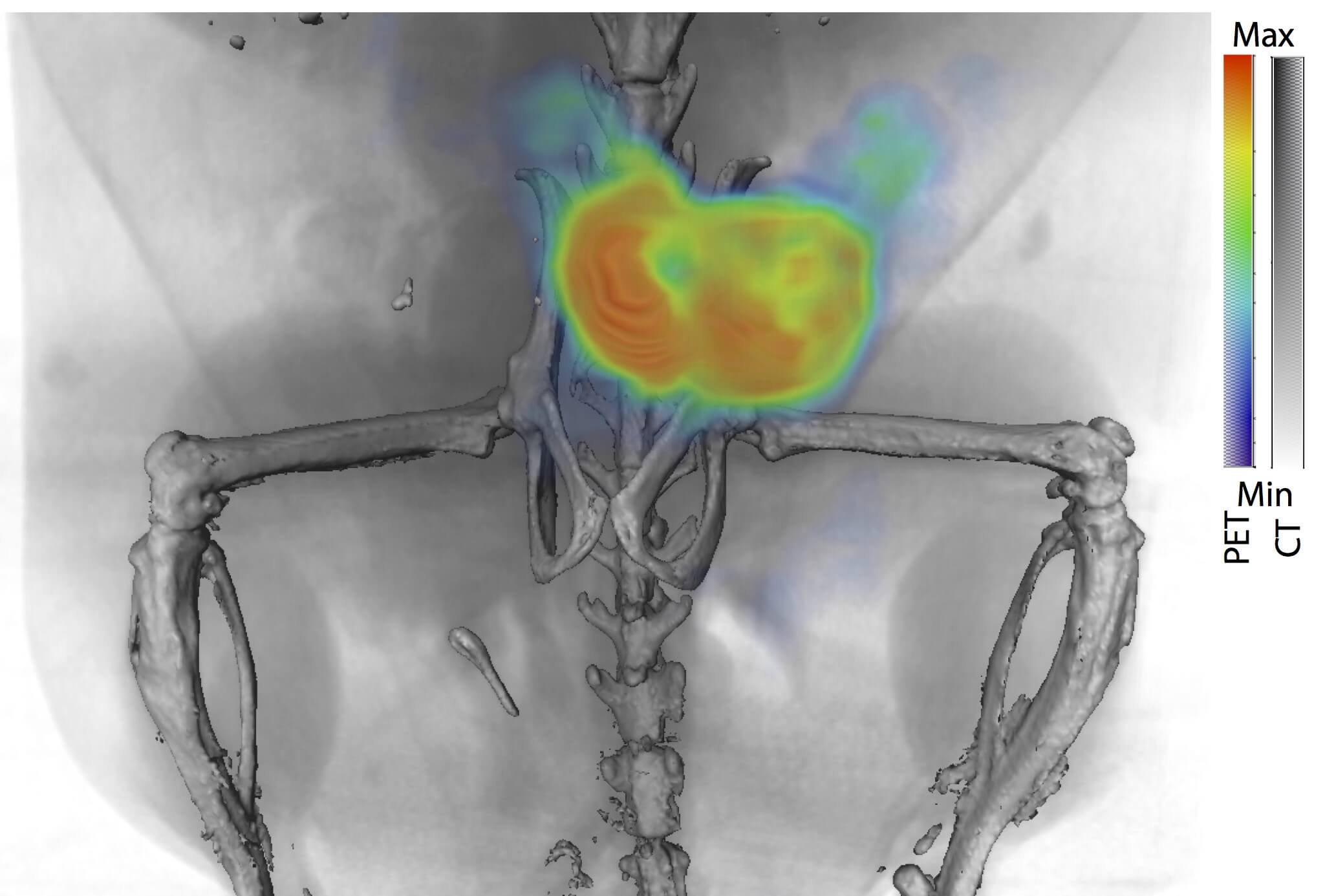 1 2 3
Uptake of 89Zr-11B6 in the prostate of a transgenic mouse with prostate cancer.
Credit: Daniel Thorek

An international group of researchers report success in mice of a method of using positron emission tomography (PET) scans to track, in real time, an antibody targeting a hormone receptor pathway specifically involved in prostate cancer. This androgen receptor pathway drives development and progression of the vast majority of prostate cancers. The technique shows promise, the investigators say, as a novel way to use such an antibody to detect and monitor prostate and other hormone-sensitive cancers, as well as to guide therapy in real time.

“The findings show that individually tailored imaging agents can provide a unique way of looking at disease progression in real time and in a noninvasive manner,” says Daniel Thorek, Ph.D., assistant professor of radiology and radiological science at the Johns Hopkins University School of Medicine and a member of the Kimmel Cancer Center, and the paper’s first author.

“Perhaps someday we can put a personalized antibody such as the one we created in our study on a therapeutic agent and conduct cancer treatment using imaging with very high specificity.”

A summary of the findings was published in Science Translational Medicine on Nov. 30.

Thorek says the success is especially important given the challenges of working with small-animal models. “We managed to very accurately and precisely monitor the mouse prostate, and that leads us to hope that a similar approach can be used to guide treatment in people,” he adds.

PSA concentration in the blood, however, is affected by numerous factors, such as age and type of tumor, making it difficult to determine true androgen receptor pathway activation.

Furthermore, attempts to target PSA with an antibody is complicated by the “washing out” of the antibody-PSA complex, a process in which the complex is formed but does not remain near the disease site, thus making it difficult to definitively identify and measure disease sites.

In the new study, the investigators developed a new antibody called 11B6 to target human kallikrein-related peptidase 2 (hK2), another antigen that indicates androgen receptor pathway activation. Unlike PSA, hK2 is specifically active only in the prostate and an aggressive type of breast cancer.

By binding free, unbound hK2 to 11B6, the research team found that the newly formed 11B6-hK2 complex is taken directly back into the cancerous cell rather than washed out. This biological process relies on a transport mechanism involving the neonatal Fc receptor, in which cells are able to recognize and take in antibodies. The Fc receptor is most well-known for how antibodies in mothers’ milk are able to pass from the gut of the baby into newborns’ bloodstream to provide them with immunity.

As far as the research team is aware, this is the first study to exploit the biological mechanism for imaging purposes, Thorek says.

In the next phase of their experiments, the team made 11B6 “light up” during PET and fluorescence imaging by binding it to zirconium-89, creating a traceable radiochemical compound called 89Zr-11B6.

By imaging the 89Zr-11B6 using PET, the team showed that binding 11B6 to hK2 can measure activity of cancerous lesions robustly, in both soft tissue and bone. Prostate and breast cancer often metastasize to bone, therefore detection of lesions in all areas of the body is critical.

To further demonstrate the potential value of 89Zr-11B6 imaging, the team tested the imaging agent in disease models under standard treatment regimens. In one such case, disease activity was imaged and quantified in mice treated with saline and a second group with enzalutamide, a drug used to treat prostate cancer by inhibiting the androgen receptor hormone activity. All of the mice had prostate cancer.

Following initial castration, imaging of 89Zr-11B6 allowed the research team to see lower androgen receptor pathway activity, as one might expect. This effect was augmented in the animals with adjuvant enzalutamide treatment. This may inform current clinical practice as the use of adjuvant enzalutamide after castration may show benefit to patients with prostate cancer.

By tracking the antibody localization to disease sites in real time, the team hopes this may be a way to determine optimal dosages that don’t compromise efficacy while avoiding negative side effects. Imaging of the antibody uptake before and after treatment could, in theory, aid in the decision of whether to keep a patient on chosen drug. If a response is seen, the imaging agent could be used to choose the right dose, balancing the therapeutic effect and minimizing adverse effects. And if there is not an imaging change with a particular drug, this tool would provide a caregiver with rapid information to discontinue ineffective treatments, saving time and cost.