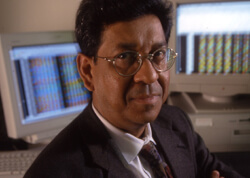 Genetic studies in humans, zebrafish and mice have revealed how two different types of genetic variations team up to cause a rare condition called Hirschsprung’s disease. The findings add to an increasingly clear picture of how flaws in early nerve development lead to poor colon function, which must often be surgically corrected. The study also provides a window into normal nerve development and the genes that direct it.

The results appear in the April 2 issue of the American Journal of Human Genetics.

About one in every 5,000 babies is born with Hirschsprung’s disease, which causes bowel obstruction and can be fatal if not treated. The disease arises early in development when nerves that should control the colon fail to grow properly. Those nerves are part of the enteric nervous system, which is separate from the central nervous system that enables our brains to sense the world.

The genetic causes of Hirschsprung’s disease are complex, making it an interesting case study for researchers like Aravinda Chakravarti, Ph.D., a professor in the Johns Hopkins University School of Medicine’s McKusick-Nathans Institute of Genetic Medicine. His research group took on the condition in 1990, and in 2002, it performed the first-ever genomewide association study to identify common variants linked to the disease.

But while Chakravarti’s and other groups have identified several genetic variants associated with Hirschsprung’s, those variants do not explain most cases of the disease. So Chakravarti and colleagues conducted a new genomewide association study of the disease, comparing the genetic markers of more than 650 people with Hirschsprung’s disease, their parents and healthy controls. One of their findings was a variant in a gene called Ret that had not been previously associated with the disease, although other variations in Ret had been fingered as culprits.

The other finding was of a variant near genes for several so-called semaphorins, proteins that guide developing nerve cells as they grow toward their final targets. Through studies in mice and zebrafish, the researchers found that the semaphorins are indeed active in the developing enteric nervous system, and that they interact with Ret in a system of signals called a pathway.

“It looks like the semaphorin variant doesn’t by itself lead to Hirschsprung’s, but when there’s a variant in Ret too, it causes the pathway to malfunction and can cause disease,” Chakravarti says. “We’ve found a new pathway that guides development of the enteric nervous system, one that nobody suspected had this role.”
Chakravarti notes that the genetic puzzle of Hirschsprung’s is still missing some pieces, and no clinical genetic test yet exists to assess risk for the disease. Most of the genetic variants that have so far been connected to this rare disease are themselves relatively common and are associated with less severe forms of the disease. The hunt continues for rare variants that can explain more severe cases.

Affymetrix provided arrays used in the study described in this publication.  Aravinda Chakravarti was a paid member of the Advisory Board of Affymetrix (2000-2013). This arrangement has been reviewed and approved by the Johns Hopkins University in accordance with its conflict of interest policies.