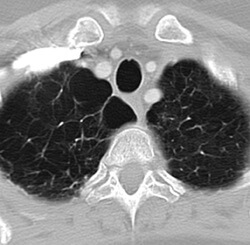 Johns Hopkins researchers say they have identified a new disease gene that, when mutated, appears to increase the risk in a small number of people of developing emphysema and a lung-scarring condition known as pulmonary fibrosis.

The affected gene, NAF1, joins a handful of genes in which mutations increase the risk of certain disorders linked to malfunctioning, shortened telomeres — the protective “caps” or ends of chromosomes.

As Mary Armanios, M.D., an associate professor of oncology at the Johns Hopkins University School of Medicine, and her colleagues report in the August 10 issue of Science Translational Medicine, about 2 to 4 percent of cases of pulmonary fibrosis-emphysema, without other known causes, may be due to mutations in NAF1.

Patients with lung disease caused by short telomeres, such as idiopathic pulmonary fibrosis and some cases of emphysema, can be very sensitive to certain medications, especially immune-suppressing drugs used during bone marrow and lung transplants. Those patients “need to be identified through molecular testing and treated with special care,” Armanios says. “It’s very clear now that making the short telomere syndrome diagnosis prior to transplant is essential to managing these patients.”

Telomeres are specialized units at the ends of chromosomes that protect the ends from unraveling, like the plastic sheath, or aglet, at the end of a shoelace. Telomeres grow shorter over time, acting as a kind of aging clock for cells, until the chromosome ends are unprotected and their cells eventually stop dividing. In 2009, Johns Hopkins researcher Carol Greider was among those who received the Nobel Prize for Physiology or Medicine for their discovery of telomerase, the enzyme that rebuilds telomeres.

Telomere defects that lead to abnormally short telomeres are associated with a condition known as short telomere syndrome that manifests as pulmonary fibrosis-emphysema in adults. Patients are also at risk for bone marrow failure, leukemia and liver disease.

For the new study, Armanios and her colleagues, looking for new diseased genes, sequenced the whole genomes of five people who had abnormally short telomeres and signs of short telomere syndrome. When this approach did not turn up new mutations, they examined the group to see which individuals had unusually low levels of telomerase RNA and started a new search for mutations in the genes that produce it. That search turned up a mutation in NAF1 in a pulmonary fibrosis-emphysema patient Armanios and her team evaluated.  Other family members, including one who also had emphysema, also carried the mutation.

Armanios and colleagues went on to sequence the genomes of 25 other pulmonary fibrosis patients, turning up a second NAF1 mutation in a woman who also had bone marrow failure. These two mutations were linked to lower levels of telomerase RNA. The mutant NAF1 protein in these patients was defective: It was missing a component that permits its entry into the nucleus where it stabilizes telomerase RNA.

To confirm the suspected impact of the NAF1 mutations on telomerase, the researchers used the gene-editing technique CRISPR/Cas9 to induce a mutation in the NAF1 gene of mice. They found that the mutations decreased levels of telomerase RNA by half in the mice, but did not affect the function of other RNAs in the body. “What that told us is that even the loss of one copy of NAF1 results in loss of telomerase, and that is enough to disturb the whole system,” Armanios says. This was surprising since NAF1 contributes to the stability of nearly 100 different RNAs. “Despite that,” Armanios says, “the functions of these other RNAs were preserved, while the loss of telomerase RNA caused telomere shortening.”

The Johns Hopkins team works with one of the world’s largest groups of patients with telomere defects. Started in 2005, the study includes more than 100 families, with individuals ranging in age from infancy to adulthood. Telomere shortening may increase the risk of lung disease in these patients by preventing stem cells from dividing and replacing injured cells in the lungs, making it more difficult for lung cells to replenish themselves when they are threatened by environmental toxins such as cigarette smoke.  “This study suggests that telomere defects may be more common than expected in patients with pulmonary fibrosis-emphysema, and it sheds further light on the root cause of these devastating conditions with the hope of identifying new therapies,” Armanios says.