Male rats without testosterone have weaker anterior cruciate ligaments (ACLs) than those with it
Release Date: September 20, 2016 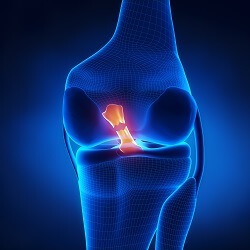 An illustration of a torn anterior cruciate ligament (ACL) in a knee.
Credit: iStock

In studies on rats, Johns Hopkins Medicine scientists report new evidence that the predominance of the hormone testosterone in males may explain why women are up to 10 times more likely than men to injure the anterior cruciate ligament (ACL) in their knees.

Specifically, they found that normal male rats with natural supplies of testosterone had stronger ACLs than those that had been castrated and no longer produced the hormone. The results are described online Sept. 20 in the journal The Knee.

“The primary implication of the study is that testosterone may contribute to the ACL’s ability to withstand tensile loads and may be one of multiple factors response for the disparate ACL injury rate between men and women,” says William Romani, Ph.D., M.H.A., a physical therapist and sports medicine researcher who was a visiting faculty member in The Johns Hopkins University’s Department of Biomedical Engineering from 2009 to 2015.

Senior study author Jennifer Elisseeff, Ph.D., a biomedical engineer at The Johns Hopkins University, says the new finding could eventually lead to techniques that use circulating sex hormone levels to identify athletes at higher risk for ACL injury who may benefit from training strategies to strengthen the ligament.

The ACL is a flexible, stretchable tissue that tunnels through the knee, connecting the femur, or thigh bone, with the tibia, or shin bone. More than 200,000 people in the U.S. get ACL injuries, ranging from partial to full tears, most often while playing sports. Previous studies have found that girls and women are anywhere from two to 10 times more likely to tear an ACL than men doing similar activities. Explanations for the sex differences include differences in anatomy, strength, reflex times and hormones.

Romani, who now works with the AARP Foundation’s Experience Corps, conducted previous research on rats showing that that estrogen — a predominantly female hormone — reduces ACL strength, but he also found that knee ligaments in both sexes contain receptors for testosterone.

“Our thought was that while estrogen may make the female ACL weaker and more prone to injury, the male hormone testosterone may act to strengthen the ACL and protect it from injury,” says Romani.

In the new research, Romani and Elisseeff removed the ACL — still connected to the tibia and femur — from 16 healthy, 12-week-old male rats. Eight of the rats were normal, with testosterone levels averaging 3.54 nanograms per milliliter, and eight had been castrated, giving them nearly undetectable levels of the hormone, at 0.14 nanograms per milliliter. The researchers measured the cross-sectional area of each ACL and then connected the bones — with the ACL stretched between them — to a machine that could pull the bones apart, tugging on the ACL. Then, they tested the strength of the ligaments by measuring how much force it took to tear each ACL.

The researchers found that it took more force — 34.5 newtons, compared to 29.2 newtons — to tear the ACLs from mice with normal levels of testosterone, indicating that the ligaments were stronger. Since researchers have generally accepted that a stronger ACL is less prone to injury, the results support a link between testosterone and ACL injuries.

More work is needed to explain exactly which pathways and molecules testosterone and estrogen act through to influence ligament strength, and whether the hormones have the same impact on other ligaments in the body.

Stephen Belkoff of the Johns Hopkins University School of Medicine was also a study author.

Funding for the study was provided by the National Institute of Arthritis and Musculoskeletal and Skin Diseases.