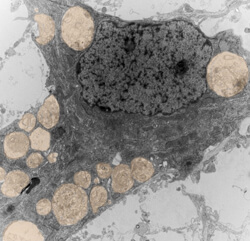 Working with mice, researchers at Johns Hopkins have contributed significant new evidence to support the idea that high doses of cocaine kill brain cells by triggering overactive autophagy, a process in which cells literally digest their own insides. Their results, moreover, bring with them a possible antidote, an experimental compound dubbed CGP3466B.

A summary of the study, which also found signs of autophagy in the brain cells of mice whose mothers received cocaine while pregnant, will be published online the week of Jan. 18 in the Proceedings of the National Academy of Sciences.

“We performed ‘autopsies’ to find out how cells die from high doses of cocaine,” says Solomon Snyder, M.D., professor of neuroscience at the Johns Hopkins University School of Medicine. “That information gave us immediate insight into how we might use a known compound to interfere with that process and prevent the damage.”

After discovering in 1990 that brain cells use the gas nitric oxide to communicate, Snyder and his research team have spent decades studying its impact. In 2013, the team found that nitric oxide is involved in cocaine-induced cell death through its interactions with GAPDH, an enzyme, but didn’t learn how precisely the cells were dying.

To find out, the research team examined nerve cells from mouse brains for clues. Snyder says cells, like whole animals, can die from extreme temperatures, toxins and physical trauma, but can also commit “suicide” in three ways that are chemically programmed and controlled by different proteins.

One such way is autophagy, a normal and much-needed cellular “cleanup process” that rids cells of debris that accumulates in membrane-enclosed vacuoles, or “bags” within the cell. These bags fuse with other bags, enzyme-rich lysosomes, which are filled with acids that degrade the contents of the vacuoles. Only when this process accelerates and spins out of control does it cause cell death, Snyder explains.

By measuring changes in the levels of proteins that control each cell death program and by observing the cells’ physical changes, the team saw clearly that cocaine causes neuronal cell death through out-of-control autophagy. That confirmed previous results from two other groups that found cocaine-induced autophagy in astrocytes and microglia, which are neuron support cells.

“A cell is like a household that is constantly generating trash,” says Prasun Guha, Ph.D., postdoctoral fellow at Johns Hopkins and lead author of the paper. “Autophagy is the housekeeper that takes out the trash — it’s usually a good thing. But cocaine makes the housekeeper throw away really important things, like mitochondria, which produce energy for the cell.”

Because the team already knew that nitric oxide and GAPDH were involved in the process, they tested the ability of the compound CGP3466B, known to disrupt nitric oxide/GAPDH interactions, to halt cocaine-induced autophagy. They also tested other chemicals known to prevent the other two forms of cellular suicide, but only CGP3466B protected mouse nerve cells in the brain from death by cocaine.

According to previous research from the same team, CGP3466B was also able to rescue the brain cells of live mice from the deadly effects of cocaine, but they had not connected the phenomenon to autophagy. When the scientists recently gave mice a single dose of cocaine and looked for signs of autophagy in their brain cells, they detected autophagy-associated proteins and changes in vacuoles in adults and in mouse pups whose mothers had received cocaine while pregnant.

“Since cocaine works exclusively to modulate autophagy versus other cell death programs, there’s a better chance that we can develop new targeted therapeutics to suppress its toxicity,” says Maged M. Harraz, Ph.D., a research associate at Johns Hopkins and lead co-author of the paper.

Snyder says the team hopes its work will eventually lead to treatments that protect adults and infants from the devastating effects of cocaine on the brain. Since CGP3466B has already been tested in phase II clinical trials to (unsuccessfully) treat Parkinson’s disease and ALS, it is known to be safe for humans, but the researchers caution that many more years of studies are needed to definitively show whether it is effective for preventing cocaine damage, first in mice, then in humans. They also want to create and test derivatives of CGP3466B to learn more about cocaine-induced autophagy and see if cocaine is killing any cells outside the brain.

This work was supported by a grant from the National Institute on Drug Abuse (DA000266).