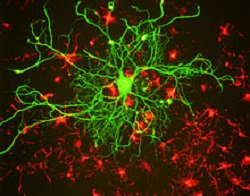 Image of a rodent neuron shown in green.
Credit: Gerry Shaw via Wikimedia

Researchers at Johns Hopkins Medicine report they have identified a biochemical pathway linking oxidative stress and the amino acid cysteine in Huntington’s disease. The findings, described in last week’s issue of the Proceedings of the National Academy of of Sciences, provide a mechanism through which oxidative stress specifically damages nerve cells in Huntington’s disease, an inherited and fatal neurodegenerative disorder.

Because cysteine deficiency and oxidative stress have been linked to other diseases, such as Alzheimer’s disease, arthritis, cardiovascular disease, AIDS and cancer, the investigators say these findings may facilitate therapeutic strategies for many serious conditions.

Researchers Juan Sbodio, Ph.D.; Solomon Snyder, M.D., Ph.D., D.Sc.; and Bindu Paul, Ph.D., all of the Johns Hopkins University School of Medicine’s Solomon H. Snyder Department of Neuroscience, say that while there are many ways human cells regulate oxidative stress, those involving cysteine play a central role. “If you deplete cysteine, you will affect a majority of these antioxidant defenses,” says Paul.

The researchers’ past experiments in mice, published in the May 2014 issue of Nature, showed that the protein responsible for making cysteine, cystathionine gamma-lyase (CSE), is depleted in HD. When amino acids levels are low, normal cells will activate CSE using a protein called activating transcription factor 4 (ATF4). ATF4 recognizes the DNA sequences that code for proteins involved in amino acid synthesis, including CSE, and tell the cell to start up the cysteine production line for protein synthesis and generation of other protective molecules derived from cysteine. While cells deficient in cysteine can use alternate pathways for a short time, such cells are eventually overwhelmed by oxidation and die. In this study, researchers discovered that ATF4 is disrupted in cells with Huntington’s disease, affecting cysteine production.

To characterize this pathway, researchers grew both healthy control brain cells and brain cells derived from mice with Huntington’s disease under low cysteine conditions. They found that while the healthy cells increased the activity of ATF4 under low cysteine conditions, they could not detect ATF4 in the cells from mice with Huntington’s disease. This effect was unique to cysteine: When the researchers grew cells in conditions depleted of other amino acids, ATF4 levels were normal in both control and Huntington’s cells. “That intrigued us, and we wondered if elevated oxidative stress would affect the response of ATF4 because of cysteine’s role in cellular defense,” Paul says.

To test this, the researchers induced oxidative stress in healthy cells by exposing them to hydrogen peroxide, a strong oxidizing agent, and then cutting off their cysteine supply. Under these conditions, the cells’ expression of ATF4 was greatly reduced. Conversely, when Huntington’s cells were grown in cysteine-depleted conditions but given an antioxidant, vitamin C, the cells regained their ability to create ATF4 and make their own cysteine.

“These findings implicate a vicious cycle where low levels of cysteine cause oxidative stress, which leads to decreased cysteine levels, therefore creating more oxidative stress, further slowing cysteine production,” says Sbodio. The researchers’ previous studies showed that supplementing cysteine in the diets of mice exhibiting Huntington’s disease delays the progression of the disease’s symptoms. The present study reveals the mechanisms through which cysteine is regulated and how oxidative stress affects this system.

Paul and her colleagues note that antioxidants have long been noted as beneficial for promoting health, but they caution that while antioxidants can mitigate disease symptoms in the lab, much more information on cysteine’s role in the body is needed before researchers can confirm its therapeutic value. In fact, the researchers pointed out that supplementing with too much cysteine could be harmful. Paul says that for some conditions, there may be benefits, but people should “always consult their doctor before beginning any supplement. We don’t want patients to self-medicate.”

This study was funded by grants from the National Institute of Mental Health (MH18501) and the CHDI Foundation.