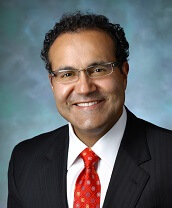 Johns Hopkins neurosurgeon Alfredo Quinones-Hinojosa has been awarded the Cortes de Cadiz Prize in the category of surgery by the city council of Cadiz, Spain. The jury prize, in which members of the Royal Academy of Medicine and Surgery took part, was awarded to Quinones-Hinojosa not only for his renowned scientific career but also for his “moving life experience,” which, the judges noted, is full of “self-improvement and success.”

The prize is named after Pedro Virgili, the doctor who in 1748 founded the Surgery Royal College of the Spanish Army in Cadiz, one of the first surgery colleges in Europe and the foundation for the first university of medicine in Spain.

“It is a great honor to represent our wonderful institution, our country and our cultures, and to find myself surrounded by so many wonderful people who have supported me through the years,” Quinones-Hinojosa says. “It is humbling to know that this award is given to extraordinary people, and that this recognition is not about me but about my family, friends, colleagues and patients — they are the ones who are extraordinary and who truly deserve this recognition.”

Quinones-Hinojosa was born outside Mexicali, Mexico, to a poor family. His difficult journey from humble beginnings to outstanding neurosurgeon at Johns Hopkins has been well-documented in programs such as Hopkins and NOVA scienceNOW on PBS. After spending some of his teenage years working with relatives as a farm laborer in the United States, he tried twice to enter the country on his own. The first time, he was turned back just north of the border fence that he had jumped. He made it across the second time and rejoined his relatives.

In 2005, he came to the Johns Hopkins University School of Medicine as an assistant professor of surgery specializing in brain cancer and pituitary tumors, and by 2012 he had become a full professor.

When Quinones-Hinojosa is not in the operating room, he is teaching or working in his laboratory, which has been funded by the National Institutes of Health since 2006. Quinones-Hinojosa focuses on the surgical treatment of complex primary and metastatic brain tumors, with an emphasis on motor and speech mapping during surgery, as well as the treatment of patients with pituitary and skull base tumors using minimally invasive surgical approaches.

Quinones-Hinojosa has given numerous commencement speeches, and he has been the recipient of multiple doctoral and honorary degrees around the United States and the world. This summer, he will be the commencement speaker at several universities, including Ponce Health Sciences University in Puerto Rico, and he will receive several honorary degrees, including a doctorate of science from the University of Notre Dame in Indiana.