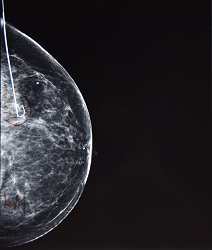 For patients with the most common type of noninvasive breast cancer, routine testing for estrogen and progesterone receptors in tissue taken at the first “needle” biopsy is both unnecessary and wasteful, according to results of a study led by Johns Hopkins pathologists.
The results for people with ductal carcinoma in situ or DCIS were persuasive enough that The Johns Hopkins Hospital last January ended the practice of routinely conducting so-called core needle biopsy hormone receptor testing.
“If you apply our local results nationally, these unnecessary initial hormone receptor tests currently come with an annual price tag of around $35 million,” says Pedram Argani, M.D., professor of pathology and oncology at the Johns Hopkins University School of Medicine, and senior author of a study published in the August issue of The American Journal of Surgical Pathology. “Our results indicate that’s an expense without any justification. If these tests were routinely eliminated, the savings would be substantial.”
Argani also directs the Breast Pathology Service at the Sidney Kimmel Comprehensive Cancer Center at Johns Hopkins.
Each year thousands of women — and a small number of men — have “core needle biopsies,” a sampling of suspect breast tissue carried out under a local anesthetic by a radiologist. In the laboratory, pathologists determine if the small cylinder of extracted tissue contains cancer and, if it’s there, make an initial classification of what kind — either noninvasive or invasive.
The study focused solely on people newly diagnosed with DCIS, a noninvasive cancer that’s still contained within the milk ducts of the breast where it originated, and has not spread in the breast or elsewhere.
For the study, the Hopkins team reviewed the pathology and medical records of 58 such patients who, within a two-year period beginning in January 2011, had core needle biopsies showing DCIS and follow-up excision at The Johns Hopkins Hospital.
The rationale for doing the testing has always been that patients with hormone receptor-positive DCIS after excision can take relatively nontoxic medications such as tamoxifen to block the receptors and help prevent the DCIS from recurring.
However, there are multiple reasons not to automatically (“reflexively”) test a core biopsy showing DCIS for hormone receptors, Argani says. First, regardless of the core biopsy hormone receptor testing results, the standard of care in the U.S. after needle biopsy for DCIS is that the breast tissue still remaining in the suspect area is surgically removed (excised) by lumpectomy or mastectomy. Hence, the core biopsy hormone receptor results do not affect therapy.
Second, Argani adds, “almost 20 percent of the time, the excision reveals that the noninvasive DCIS that the core needle biopsy caught is actually accompanied by invasive breast cancer. So you have to receptor-test the invasive cancer that the core biopsy missed. That means the testing of the core biopsy with DCIS was useless.”
Third, when the surgical excision contains DCIS alone (as it does about 80% of the time) and the core biopsy result was negative, most physicians would recommend retesting of the DCIS in the surgically excised specimen since hormone receptor expression can be heterogeneous and a small biopsy could miss a positive area.
While hormone-blocking therapy specifically for receptor-positive DCIS can modestly lower the chance of tumor recurrence, prior studies have shown that therapy ultimately has no effect on a patient’s survival. Plus, hormone-disabling medications like tamoxifen carry side effects, including a higher than usual risk of blood clots.
“Two-thirds of our DCIS study patients did not receive hormone therapy,” Argani says, “even after excision confirmed their hormone-receptor positive DCIS status. So analyzing their needle biopsies or surgical excisionsfor receptors would have clearly been unnecessary for them.”
Today, approximately one woman gets a DCIS diagnosis for every four women diagnosed with invasive breast cancer, the National Cancer Institute reports. Fortunately, for DCIS—a Stage 0 cancer—the outlook is good. The 10-year survival rate for women after a lumpectomy is 96 to 98 percent, apparently regardless of other treatment. The average age of discovery is in the mid-50s.
In the Hopkins study, unnecessary early receptor analysis cost about $140.00 per patient for preparing a trustworthy stained slide and for the pathologist’s study of it.
“Extrapolating that to the roughly 60,000 U.S. patients diagnosed with DCIS yearly puts the cost at about $8.5 million,” Argani adds. “The unnecessary cost of automatically testing DCIS in excisions when the information is not used is $26.5 million, which adds up to $35 million dollars per year in the U.S.”
The millions saved could save 9,000 children and adults from dying of malaria worldwide, the study authors say, or provide 61,000 hungry American families a year’s food.

Funding from the study was from the Johns Hopkins University School of Medicine.
Return to Top