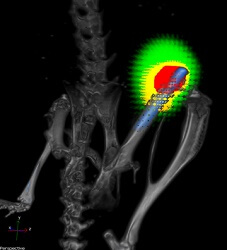 A titanium implant (blue) without a nanofiber coating in the femur of a mouse. Bacteria are shown in red and responding immune cells in yellow.
Credit: Lloyd Miller/Johns Hopkins Medicine

In a proof-of-concept study with mice, scientists at The Johns Hopkins University show that a novel coating they made with antibiotic-releasing nanofibers has the potential to better prevent at least some serious bacterial infections related to total joint replacement surgery.

A report on the study, published online the week of Oct. 24 in Proceedings of the National Academy of Sciences, was conducted on the rodents’ knee joints, but, the researchers say, the technology would have “broad applicability” in the use of orthopaedic prostheses, such as hip and knee total joint replacements, as well pacemakers, stents and other implantable medical devices. In contrast to other coatings in development, the researchers report the new material can release multiple antibiotics in a strategically timed way for an optimal effect.

“We can potentially coat any metallic implant that we put into patients, from prosthetic joints, rods, screws and plates to pacemakers, implantable defibrillators and dental hardware,” says co-senior study author Lloyd S. Miller, M.D., Ph.D., an associate professor of dermatology and orthopaedic surgery at the Johns Hopkins University School of Medicine.

Surgeons and biomedical engineers have for years looked for better ways —including antibiotic coatings — to reduce the risk of infections that are a known complication of implanting artificial hip, knee and shoulder joints.

Every year in the U.S., an estimated 1 to 2 percent of the more than 1 million hip and knee replacement surgeries are followed by infections linked to the formation of biofilms — layers of bacteria that adhere to a surface, forming a dense, impenetrable matrix of proteins, sugars and DNA. Immediately after surgery, an acute infection causes swelling and redness that can often be treated with intravenous antibiotics. But in some people, low-grade chronic infections can last for months, causing bone loss that leads to implant loosening and ultimately failure of the new prosthesis. These infections are very difficult to treat and, in many cases of chronic infection, prostheses must be removed and patients placed on long courses of antibiotics before a new prosthesis can be implanted. The cost per patient often exceeds $100,000 to treat a biofilm-associated prosthesis infection, Miller says.

Major downsides to existing options for local antibiotic delivery, such as antibiotic-loaded cement, beads, spacers or powder, during the implantation of medical devices are that they can typically only deliver one antibiotic at a time and the release rate is not well-controlled. To develop a better approach that addresses those problems, Miller teamed up with Hai-Quan Mao, Ph.D., a professor of materials science and engineering at the Johns Hopkins University Whiting School of Engineering, and a member of the Institute for NanoBioTechnology, Whitaker Biomedical Engineering Institute and Translational Tissue Engineering Center.

Over three years, the team focused on designing a thin, biodegradable plastic coating that could release multiple antibiotics at desired rates. This coating is composed of a nanofiber mesh embedded in a thin film; both components are made of polymers used for degradable sutures.

To test the technology’s ability to prevent infection, the researchers loaded the nanofiber coating with the antibiotic rifampin in combination with one of three other antibiotics: vancomycin, daptomycin or linezolid. “Rifampin has excellent anti-biofilm activity but cannot be used alone because bacteria would rapidly develop resistance,” says Miller. The coatings released vancomycin, daptomycin or linezolid for seven to 14 days and rifampin over three to five days. “We were able to deploy two antibiotics against potential infection while ensuring rifampin was never present as a single agent,” Miller says.

The team then used each combination to coat titanium Kirschner wires — a type of pin used in orthopaedic surgery to fix bone in place after wrist fractures — inserted them into the knee joints of anesthetized mice and introduced a strain of Staphylococcus aureus, a bacterium that commonly causes biofilm-associated infections in orthopaedic surgeries. The bacteria were engineered to give off light, allowing the researchers to noninvasively track infection over time.

Miller says that after 14 days of infection in mice that received an antibiotic-free coating on the pins, all of the mice had abundant bacteria in the infected tissue around the knee joint, and 80 percent had bacteria on the surface of the implant. In contrast, after the same time period in mice that received pins with either linezolid-rifampin or daptomycin-rifampin coating, none of the mice had detectable bacteria either on the implants or in the surrounding tissue.

“We were able to completely eradicate infection with this coating,” says Miller. “Most other approaches only decrease the number of bacteria but don’t generally or reliably prevent infections.”

After the two-week test, each of the rodents’ joints and adjacent bones were removed for further study. Miller and Mao found that not only had infection been prevented, but the bone loss often seen near infected joints — which creates the prosthetic loosening in patients — had also been completely avoided in animals that received pins with the antibiotic-loaded coating.

Miller emphasized that further research is needed to test the efficacy and safety of the coating in humans, and in sorting out which patients would best benefit from the coating — people with a previous prosthesis joint infection receiving a new replacement joint, for example.

The polymers they used to generate the nanofiber coating have already been used in many approved devices by the U.S. Food and Drug Administration, such as degradable sutures, bone plates and drug delivery systems.